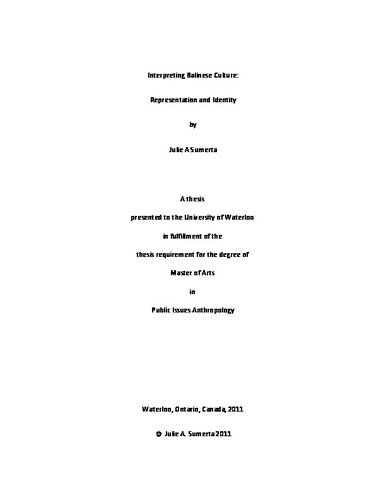 The representation of Balinese people and culture within scholarship throughout the 20th century and into the most recent 21st century studies is examined. Important questions are considered, such as: What major themes can be found within the literature?; Which scholars have most influenced the discourse?; How has Bali been presented within undergraduate anthropology textbooks, which scholars have been considered; and how have the Balinese been affected by scholarly representation? Consideration is also given to scholars who are Balinese and doing their own research on Bali, an area that has not received much attention. The results of this study indicate that notions of Balinese culture and identity have been largely constructed by “Outsiders”: 14th-19th century European traders and early theorists; Dutch colonizers; other Indonesians; and first and second wave twentieth century scholars, including, to a large degree, anthropologists. Notions of Balinese culture, and of culture itself, have been vigorously critiqued and deconstructed to such an extent that is difficult to determine whether or not the issue of what it is that constitutes Balinese culture has conclusively been answered.