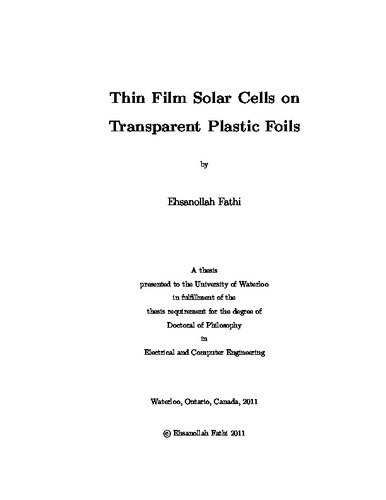 The focus of this thesis is on the optimization and fabrication of p-i-n amorphous silicon (a-Si:H) solar cells both on glass and transparent plastic substrates. These solar cells are specifically fabricated on transparent substrates to facilitate the integration of thin film batteries with these solar cells. To comply with plastic substrates, different silicon layers are optimized at the low processing temperature of 135 C. In the first part of the optimization process, the structural, electronic, and optical properties of boron- and phosphorous-doped, hydrogenated nanocrystalline silicon (nc-Si:H) thin films deposited by plasma-enhanced chemical vapor deposition (PECVD) at the substrate temperature of 135 C are elaborated. Additionally, in this part, the deposition of protocrystalline silicon (pc-Si) films on glass substrates are investigated. In the device integration and fabrication part of this thesis, the optimization process is continued by fabricating single junction devices with different hydrogen dilution ratios for the cell absorber layer. The optimum device performance is achieved with an absorber layer right at the transition from amorphous to microcrystalline silicon. To further improve the performance of the fabricated solar cells, amorphous silicon carbide buffer layers are introduced between the nc-Si p-layer and the undoped pc-Si absorber layer. Single junction p-p'-i-n solar cells are fabricated and characterized both on glass and plastic substrates. Our measurements show conversion efficiencies of 7.0% and 6.07% for the cells fabricated on glass and plastic substrates, respectively. In the last part of this research, the light trapping enhancement in amorphous silicon solar cells using Distributed Bragg Reflectors (DBRs) are experimentally demonstrated. Reflectance characteristics of DBR test structures, consisting of amorphous silicon (a-Si) / amorphous silicon nitride (SiN) film stacks are analysed and compared with those of conventional ZnO/Al back reflectors. DBR optical measurements show that the average total reflectance over the wavelength region of 600-800 nm is improved by 28% for DBR back structures. Accordingly, single junction amorphous silicon solar cells with DBR and Al back reflectors are fabricated both on glass and plastic substrates. Our results show that the short-circuit current density and consequently the conversion efficiency is enhanced by 10% for the cells fabricated on textured transparent conductive oxide substrates. In addition, these DBR back structures are designed and employed to improve the efficiency of semi-transparent solar cells. In this application, the optimized DBR structures are designed to be optically transparent for the part of the visible range and highly reflective for the red and infra-red part of the spectrum. Using these DBR structures, the efficiency of the optimum semi-transparent solar cell is enhanced by 5%.