Tradition and Commerce in Cultural Districts: A Case Study of Insadong In Seoul Korea 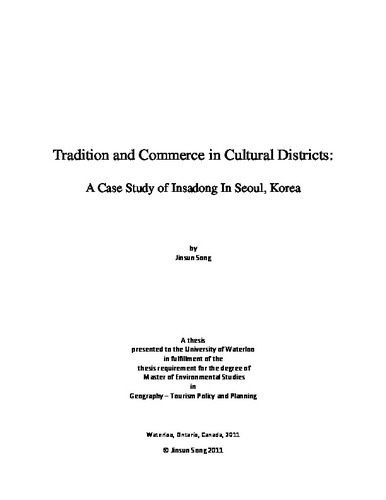 Cultural clusters with an agglomeration of heritage and historic assets represent national or local history, culture and tradition. Hence, they often become distinctive urban tourism resources supplying multifunctional places for tourists to visit and enjoy. However, the designation of a cultural district by government is not merely a strategy for the preservation of cultural assets and tourism development because a variety of stakeholders, with divergent goals and objectives, are usually involved in the process of converting cultural resources into marketable products. The number of tourists to Insadong, a representative traditional cultural district in Seoul, Korea, has increased rapidly in the last decades with many issues and problems. Insadong is a place where Koreans and foreigners alike experience Korean tradition and it is a unique area where the atmosphere combines both the historical and modern in the centre of the city. The area is also multi-functional, offering a mix of history, entertainment, cuisine, shopping etc. for a mixed clientele. This area has a long history as a cultural business district which was organically generated, but numerous issues and changes have occurred in relation to the commercial development and policy of government. Since this area gained fame as a tourism destination after it was designated as a cultural district, it also encountered problems like rising rental fees, change of space use, modifications in the items for sale, and destruction of small traditional art-related shops, which created the traditional atmosphere. This study examined the policies of the public sector and the role of the private sector in the development of Insadong through examining the government’s assessment and perspectives, the NGO’s perspectives and the entrepreneurs’ situation and expectations for business. Through analyzing crucial events, NGO’s activity, and the initiation of government policies, my research reveals dramatic change under the impact of tourism and government policies, as well as recent problems that have occurred at the cultural district. This study also examined aspects of heritage tourism in an evolving culture cluster in a major city. To the author’s knowledge, this type of research has not been undertaken previously in Korea and is rare in Asia. However, it is difficult to generalize from a case study. Thus, there is a need to undertake similar studies elsewhere to determine if what has been observed in Insadong is unique or if it is an example of a phenomenon that can be observed in other places.