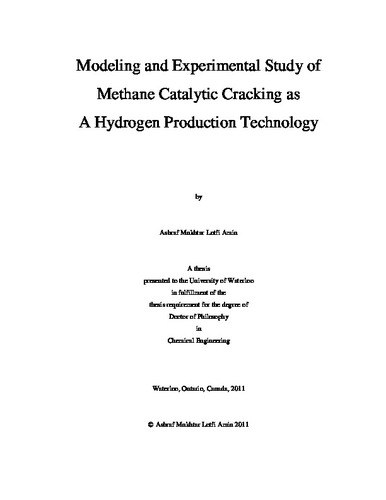 Production of hydrogen is primarily achieved via catalytic steam reforming, partial oxidation,and auto-thermal reforming of natural gas. Although these processes are mature technologies, they are somewhat complex and CO is formed as a by-product, therefore requiring a separation process if a pure or hydrogen-rich stream is needed. As an alternative method, supported metal catalysts can be used to catalytically decompose hydrocarbons to produce hydrogen. The process is known as catalytic cracking of hydrocarbons. Methane, the hydrocarbon containing the highest percentage of hydrogen, can be used in such a process to produce a hydrogen-rich stream. The decomposition of methane occurs on the surface of the active metal to produce hydrogen and filamentous carbon. As a result, only hydrogen is produced as a gaseous product, which eliminates the need of further separation processes to separate CO2 or CO. Nickel is commonly used in research as a catalyst for methane cracking in the 500-700C temperature range. To conduct methane catalytic cracking in a continuous manner, regeneration of the deactivated catalyst is required and circulation of the catalysts between cracking and regeneration cycles must be achieved. Different reactor designs have been successfully used in cyclic operation, such as a set of parallel fixed-bed reactors alternating between cracking and regeneration, but catalyst agglomeration due to carbon deposition may lead to blockage of the reactor and elevated pressure drop through the fixed bed. Also poor heat transfer in the fixed bed may lead to elevated temperature during the regeneration step when carbon is burned in air, which may cause catalyst sintering. A fluidized bed reactor appears as a viable option for methane catalytic cracking, since it would permit cyclic operation by moving the catalyst between a cracker and a regenerator. In addition, there is the possibility of using fine catalyst particles, which improves catalyst effectiveness. The aims of this project were 1) to develop and characterize a suitable nickel-based catalyst and 2) to develop a model for thermal catalytic decomposition of methane in a fluidized bed.