Investigation of the Microbial Glyoxalase System 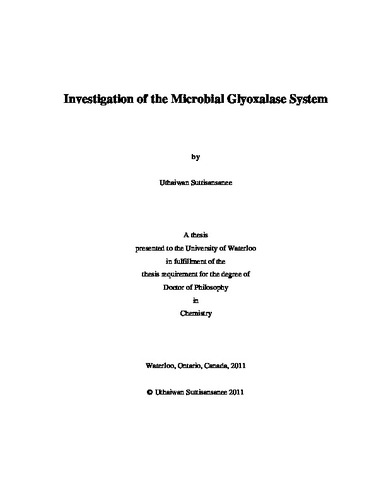 The Glyoxalase system is composed of two metalloenzymes, Glyoxalase I and Glyoxalase II, that catalyze the conversion of toxic, metabolically produced alpha-ketoaldehydes, such as methyglyoxal, in the presence of a thiol cofactor, such as glutathione, into their corresponding nontoxic 2-hydroxycarboxylic acids, leading to detoxification of these cellular metabolites. Previous studies on the first enzyme in the Glyoxalase system, Glyoxalase I (GlxI), in yeast, protozoa, animals, human, plants and Gram-negative bacteria suggest two metal activation classes, zinc-activation or non-zinc-activation (but exhibiting selective nickel/cobalt-activation). This thesis provides the key discoveries of the Glyoxalase system from Gram-positive microorganisms using the major thiol cofactor/cosubstrate that produced within that particular organisms as well as the relatedness of the proteins in the same beta-alpha-beta-beta-beta protein superfamily.