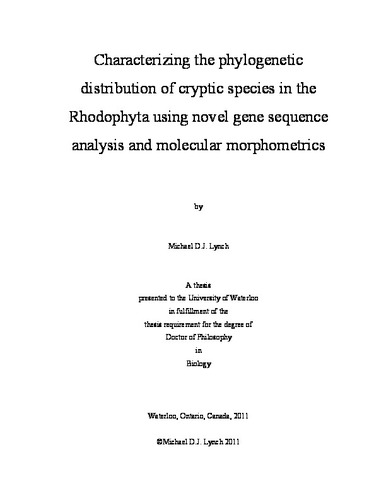 The Rhodophyta (red algae) are an ancient crown group of the Eukarya (ca. 1400-1500 million years), comprised of 5000 - 6000 species. Gametophytes of taxa excluding the speciose Class Florideophyceae are typically of very simple unicellular, filamentous or foliose morphologies. These simple morphologies are often homoplasious (resulting from convergent or parallel evolution) and can be indistinguishable among distinct taxa, leading to cryptic species. As a result, historical morphology-based taxonomy is often not congruent with evolutionary history. Intraspecific genetic variation is not yet characterized for non-Florideophyceae taxa. Here the intraspecific genetic variation was characterized for a locally endemic, morphologically distinct bangiophyte red alga, Bangia maxima Gardner using inter simple sequence repeat (ISSR) patterns from 91 individual filaments across seven local populations. A high degree of genetic variation was observed over very small distances (< 25 cm) and very little genetic exchange was observed between populations. It is possible that B. maxima is a true endemic species and its population dynamics may differ from other Bangia species. Metrics of sequence-based identification rely on genetic divergence among isolates to distinguish taxonomic units independent of morphology. Such metrics are especially useful for morphologically simple or cryptic species. The mitochondrial cytochrome oxidase c subunit 1 gene has been proposed for the Florideophyceae. An evaluation of this gene as a metric for non-Florideophyceae taxa was undertaken and limited utility was demonstrated in most lineages of Rhodophyta due to poor or inconsistent amplification and conflicts with nuclear and plastid phylogenies. Patterns of genetic divergence among taxa are used to infer evolutionary relationships. The nuclear ribosomal small subunit (nSSU rRNA) is the taxonomically broadest pool of gene sequence data for the Rhodophyta. The use of stochastic models of nucleotide evolution is the most common approach to inferring phylogenies using this gene, ignoring much of its evolutionary information as different characters that contribute to secondary structure (e.g. paired nucleotides) are treated independently. The incorporation of structural information leads to more biologically realistic evolutionary models increasing phylogenetic resolution. Parametric models incorporating structural information were used here to more fully resolve phylogenies for all known Rhodophyta lineages. Novel phylogenetic topologies were observed and well supported for each Class within the Rhodophyta resulting in a number of formally proposed or suggested taxonomic revisions. These include phylogenetic resolution of Rhodophyta Classes, support for the introduction of 11 genera within the Bangiales and support for various taxonomic revisions within the Florideophyceae previously proposed but not yet fully adopted. As structure evolves more slowly than its constituent sequence, secondary structure elements can further resolve evolutionary relationships, especially in lineages as old as the Rhodophyta. A novel encoding of secondary structure elements and subsequent multivariate analysis was performed for all known Rhodophyta nSSU rRNA gene sequences, reinforcing phylogenetic results. Computer programs developed for these analyses are publicly available. The analyses presented here significantly advanced understanding of the evolutionary distribution of cryptic species within the Rhodophyta. Furthermore, useful methods for the characterization of such species are presented, as is a demonstration of the utility of biologically realistic sequence models parameterizing nSSU rRNA structure in resolving ambiguous phylogenetic relationships. Most importantly, this work also represents a significant improvement toward taxonomy congruent with evolutionary history for the Rhodophyta.