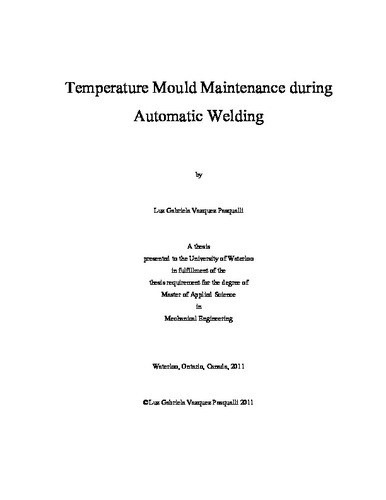 An automatic system to weld multiple layers using Tungsten Arc (TIG) welding was in the process of being developed by Tool-Tec Welding Inc, prior to the company’s recent bankruptcy and subsequent closure. One of the project’s main concerns was the thermal expansion experienced by the part to be welded. To avoid having to install expensive sensors, it is necessary to predict the temperature and the dilatation of the mould during the welding process. The mould to be welded is preheated to prevent excessive stress due to extreme temperature differences in the material. As well, it is necessary to maintain the temperature of the mould during the welding process in order to avoid distortions or changes in size larger than 1 mm. Two models have been developed to predict the size of the preheat temperature of the mould and prevent mould size changes. One model uses the results of several simulations made with finite element analysis (FEA), while the other one takes advantage of Tool-Tec expert knowledge using the Fuzzy Logic method. Validation of both theories was done at the University of Waterloo, as Tool-Tec had at that point closed down. For the experiment, an MIG (Metal Arc Welding) robot was used, together with a medium-sized mould and an infrared camera. Using an IR camera is preferable to using sensors because a camera gives the whole temperature of the mould while the sensors provide information only about some points, and these may not necessarily be representative ones. However, an IR camera can record hundreds of pictures in a single experiment and analyzing them one by one to sort the useful from the useless is tedious work. Therefore, an automatic selection of the useful pictures and recognition of the mould was the best way to review the data. In the end, successful results were obtained since it was possible to maintain the preheat temperature of the mould within the required limits in order to avoid changes in size larger than 0.05mm. Nevertheless, future tests should involve larger and smaller moulds in order to tune the models presented in this thesis.