Theta-burst rTMS over SI modulates tactile perception on the hand 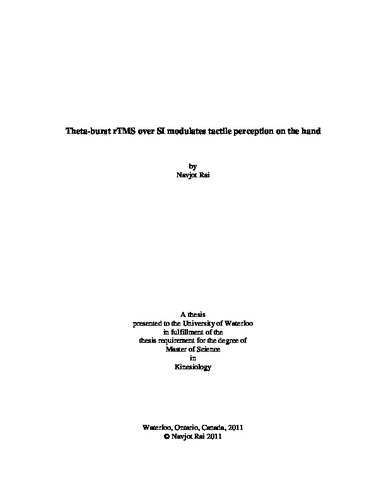 Fine motor control of the hand relies on intact somatosensory integration and feedback. Impaired hand movements are observed in patient groups where touch perception and processing within the primary somatosensory cortex (SI) is abnormal. A repetitive transcranial magnetic stimulation paradigm called continuous theta-burst stimulation (cTBS) can be used to induce physiological changes to the underlying cortex. The effect of cTBS on tactile perception is unknown. This Master’s research thesis examined the effect of cTBS over SI on tactile discrimination on the hand in healthy humans. Specifically, the goal of this thesis was to reveal the modulatory effects of cTBS on tactile temporal and spatial psychophysical measures on the hand. In separate experiments, temporal discrimination threshold (TDT) and the spatial measure of amplitude discrimination were measured from the right hand before and for up to 35 minutes following cTBS over left SI. Compared to pre cTBS values, TDT was elevated immediately following cTBS (3-6 minutes) and at later intervals (11-18 minutes). Spatial tactile perception was also measured through amplitude discrimination over the same time course and compared to pre cTBS values thresholds were impaired for up to 18 minutes. These experiments reveal that cTBS over SI impairs tactile acuity on the contralateral hand. The effects last for up to 18 minutes and subsequent measures return to pre cTBS levels. This work is important in identifying means to modulate SI cortical excitability and has potential for clinical application in patient groups with altered somatosensory processing.