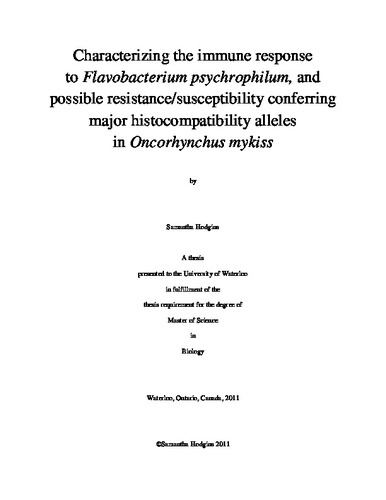 Oncorhynchus mykiss, commonly known as rainbow trout, is an economically important species. Rainbow trout can be found in freshwater habitats across Canada and is present in over 1000 lakes and streams in British Columbia alone. In addition to food production, the aquaculture industry of Canada maintains restocking programs so sport fishing does not deplete natural resources. Coldwater disease is an increasingly prevalent issue and has a deleterious impact on farmed populations in Canadian aquaculture. Mortalities can approach approximately 80% in infected populations, causing significant monetary losses. However, the immune response to Flavobacterium psychrophilum, the causative agent of coldwater disease in rainbow trout, has yet to be fully elucidated. This project assessed that response using several measures. Firstly, Major Histocompatibility (MH) genes play an important role in initiating the immune response. Specific alleles of these genes can be related to resistance or susceptibility to disease. Thus DNA of individual rainbow trout from four British Columbia populations was extracted and sequenced to identify allelic differences between subpopulations. Secondly, the immune response to the bacteria was characterized utilizing whole blood with two immunological assays, chemiluminescent detection of oxygen burst responses and enzyme-linked immunosorbent assay for assessing antibody production. There were significant differences not only in MH class II β variability of sub-populations of rainbow trout but also in the immune response between vaccinated and non-vaccinated rainbow trout.