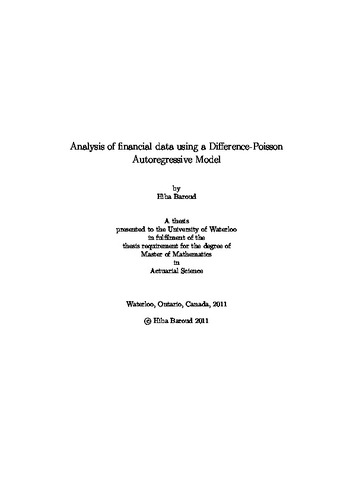 Box and Jenkins methodologies have massively contributed to the analysis of time series data. However, the assumptions used in these methods impose constraints on the type of the data. As a result, difficulties arise when we apply those tools to a more generalized type of data (e.g. count, categorical or integer-valued data) rather than the classical continuous or more specifically Gaussian type. Papers in the literature proposed alternate methods to model discrete-valued time series data, among these methods is Pegram's operator (1980). We use this operator to build an AR(p) model for integer-valued time series (including both positive and negative integers). The innovations follow the differenced Poisson distribution, or Skellam distribution. While the model includes the usual AR(p) correlation structure, it can be made more general. In fact, the operator can be extended in a way where it is possible to have components which contribute to positive correlation, while at the same time have components which contribute to negative correlation. As an illustration, the process is used to model the change in a stock’s price, where three variations are presented: Variation I, Variation II and Variation III. The first model disregards outliers; however, the second and third include large price changes associated with the effect of large volume trades and market openings. Parameters of the model are estimated using Maximum Likelihood methods. We use several model selection criteria to select the best order for each variation of the model as well as to determine which is the best variation of the model. The most adequate order for all the variations of the model is $AR(3)$. While the best fit for the data is Variation II, residuals' diagnostic plots suggest that Variation III represents a better correlation structure for the model.