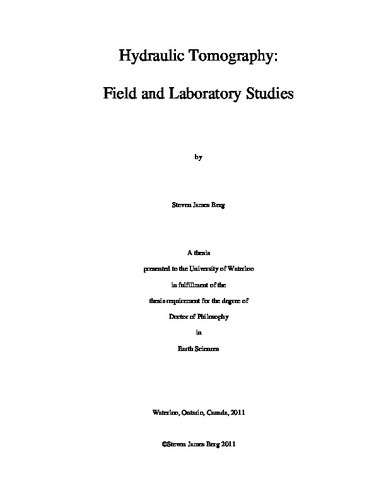 Accurately characterizing the distribution of hydraulic parameters is critical for any site investigation, particularly those dealing with solute or contaminant transport. Despite the fact that many tools are currently available for both characterizing (e.g. soil core analysis, slug and pumping tests, direct push techniques, etc.,) and modeling (e.g. geostatistical interpolators, construction of geological models, etc.,) heterogeneous aquifers, this still remains a challenge. In this thesis, hydraulic tomography (HT), a recently developed tool for characterizing and modeling heterogeneous aquifers is evaluated under both laboratory and field conditions. To date, both steady state hydraulic tomography (SSHT) and transient hydraulic tomography (THT) have been demonstrated at the laboratory scale, however, only SSHT has been rigorously validated through the prediction of independent tests (those not used for estimating the distribution of hydraulic parameters), and comparison to other characterization/modeling techniques. Additionally, laboratory and field validations of HT using comparisons other than the prediction of independent pumping tests (e.g. prediction of solute transport) are lacking. The laboratory studies performed in this thesis address some of these gaps by: i) rigorously validating THT through the prediction of independent pumping tests, and comparison to other characterization techniques; ii) using HT estimated parameter distributions to predict the migration of a conservative tracer in a heterogeneous sandbox aquifer; and, iii) predicting the flow of water to a well in a heterogeneous, unconfined, sandbox aquifer. For all three cases, HT was compared to more traditional characterization/modeling approaches, such as; the calculation of homogeneous effective parameters, kriging of point data, or the creation and calibration of a geological model. For each study the performance of HT was superior to the other characterization methods. These laboratory experiments demonstrated both the ability of HT to map aquifer heterogeneity, and the critical need for accurately understanding heterogeneity in order to make accurate predictions about a system. In this regard, HT is a powerful tool at the laboratory scale where the forcing functions (i.e., boundary conditions, flow rates, etc.,) are accurately known. While several field scale HT studies have been reported in the literature, none attempt to validate 3D THT through the prediction of independent pumping tests, or through comparison to known geology. The application of THT at the field scale presents unique challenges not faced in the laboratory setting. For example, boundary conditions are not accurately known and it is not possible to instrument a field site as densely as a sandbox aquifer. In the field studies conducted as part of this thesis, THT was validated by comparing estimated hydraulic parameter fields to known geology (borehole data) and simulating 9 pumping tests that were performed at the site. The THT analysis was able to capture the salient features of the aquifer (the presence of a double aquifer separated by an aquitard), and was able to reasonably reproduce most of the pumping tests. For comparison purposes, a homogeneous model and three additional heterogeneous models were created: i) permeameter estimates of hydraulic conductivity from soil cores were interpolated via kriging; ii) the transition probability/Markov Chain approach was used to interpret material classifications from borehole logs; and iii) a stratigraphic model was created and calibrated to pumping test data. Of these cases, THT and the calibrated stratigraphic model performed best, with THT performing slightly better. This work indicates that it is possible to interpret multiple pumping tests using hydraulic tomography to estimate the 3D distribution of hydraulic parameters in heterogeneous aquifer systems. Also, since hydraulic tomography does not require the collection and analysis of a large number of point samples, it is likely comparable in cost to other characterization/modeling approaches.