Fading Inner Suburbs? A Historio-Spatial Analysis of Prosperity Indicators in the Urban Zones of the 15 Largest Census Metropolitan Areas. 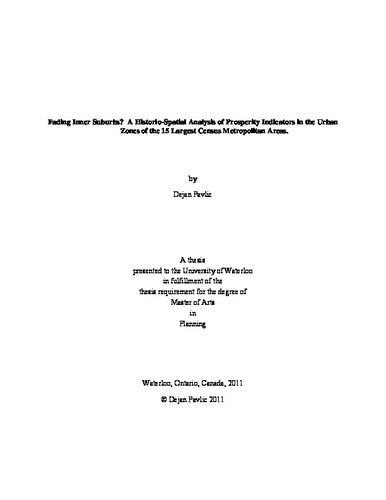 The possibility of urban decline in metropolitan post-war inner suburbs is currently being examined in the planning literature, particularly in the United States. Inner suburbs are built between 1946 and 1971 and are therefore older and structurally different from the later suburbs. At the same time, they lack the amenities of the core and the inner cities. This thesis aims to examine whether inner suburban decline is occurring in Canada. 15 largest Census Metropolitan Areas (CMAs) are selected for the purpose of this study. All CMAs are then separated into five urban zones: the core, the inner suburbs, the outer suburbs, and the fringe/exurbs. All zones are then assessed for decline based on relative changes in median household income, average dwelling values, and average gross rent in the period between 1986 and 2006. Subsequently, nine of the largest CMAs are also assessed for declines in the prosperity factor and the exclusivity factor. These variables are extracted via a factor analysis which includes variables measuring demographic, socio-economic, and housing characteristics. Results indicate that inner suburbs declined in median household income, the average value of dwelling, and the prosperity factor measures. In contrast, average gross rent and the exclusivity factor showed less clear results. Overall, the results obtained in this study suggest that Canada’s inner suburbs are experiencing decline. The possible causes of inner suburban decline remain poorly understood. A number of possible explanations are offered, ranging from the lack of urban appeal of the inner suburbs, the decline of the industrial employment sector, to aging housing stock, the movement of displaced low-income immigrants, and the aging of seniors with limited income. More research is necessary in order to establish plausible mechanisms beyond preliminary speculation. A number of policy approaches to inner suburban decline are outlined. Emphasis is placed on the revitalization of housing, greater cooperation between metropolitan regions and implementation of smart growth strategies. Further research avenues include the confirmation of the phenomenon in Canada, as well as policy case studies examining the success of planning approaches in arresting inner suburban decline.