Synthetic, Mechanistic and Theoretical Studies Related to the Kinamycin Antibiotics 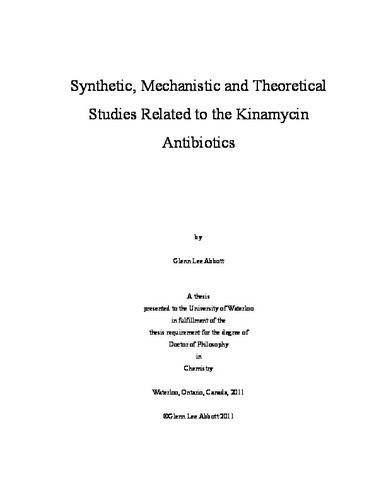 The synthesis of an isosteric-isoelectronic analogue of prekinamycin, an N-cyanobenzo[b]carbazoloquinone 2.1, is described. The key steps include a Vilsmeier-Haack formylation, a regioselective bromination, a Buchwald-Hartwig cross-coupling, a palladium mediated oxidative cyclization and N-cyanation to furnish the target in fifteen steps in an overall yield of 1.6%. Subsequent bioactivity studies were conducted in which the cytotoxicity of various compounds on K562 cells, a human erythroleukemic cell line, revealed that the analogue had a similar bioactivity profile to prekinamycin. These results suggest that the diazo functionality may not be an absolute requirement for bioactivity. A study of the reactivity of nitric oxide with diphenyldiazomethane, kinamycin A and isoprekinamycin diacetate was undertaken. Three products were isolated from the reaction with diphenyldiazomethane: a nitrimine 3.7, benzophenone and, for the first time, dinitrodiphenylmethane 3.9. The source of the two nitrogens in the nitrimine and dinitrodiphenylmethane was elucidated through isotopic labeling experiments with 15N-labeled diphenyldiazomethane. Results suggest that two separate 1,3-dipolar cycloadditions generating two different 5-membered intermediates via two separate [3+2] cycloadditions, furnishing the nitrimine and benzophenone, are occurring. Subsequent theoretical studies reveal that the [3+2] cycloadditions are in accord with experimental results. Further calculations show that the proposed intermediates and transition state structures are in good agreement with the product distribution and isotopic labeling studies. The kinamycins were found to be unresponsive to NO exposure in which theoretical calculations reveal that the free energy of activation for the 1,3 dipolar cycloadditions is significantly higher for the natural products than for diphenyldiazomethane. A comprehensive theoretical study on the chemistry of the N-acetyl indole-2,3-quinodimethanes (N-Ac IQDM 5.1) at the DFT B3LYP 6-31 G(d) level is described. Investigation of amide conformations of N-Ac IQDM in which good agreement between experimental and theoretical results is shown. Subsequent studies addressing regioselectivity and stereoselectivity of Diels-Alder (DA) reactions are described. FMO theory does not provide a rationalization for the regioselectivity observed in DA reactions of N-Ac IQDM. Transition state calculations were carried out to probe the regioselectivity of DA reactions of this system. For acrolein, Δ‡G was found not to be predictive of regiochemistry as observed experimentally. However, the calculated barriers, Δ‡E and Δ‡H, are in qualitative agreement with experimental trends in which the major regioisomer is predicted to be C-2 DA adduct. Methacrolein and crotonaldehyde were also examined. On comparison to acrolein, Δ‡G predicts that both α-substitution (i.e. methacrolein) and β-substitution (i.e. crotonaldehyde) increases regioselectivity for the C-2 regioisomer. Furthermore, the Δ‡E and Δ‡H data sets for methacrolein predicts increased regioselectivity for the C-2 adduct; the Δ‡E and Δ‡H data sets for crotonaldehyde predicts decreased C-2 regioselectivity. Efforts towards the synthesis of tetrahydrofluorenes via DA reactions of ethyl 2,3-dimethylene-2,3-dihydro-1H-indene-1-carboxylate (6.20) and diethyl 2,3-dimethylene-2,3-dihydro-1H-indene-1,1-dicarboxylate (6.36) are described and were generated from the corresponding ethyl 2-(2-(1-acetoxybuta-2,3-dien-2-yl)phenyl)acetate (6.18) and the diethyl 2-(2-(1-acetoxybuta-2,3-dien-2-yl)phenyl)malonate (6.35), respectively. Employing various solvents and bases, the carboxylate 6.20 failed to provide the desired DA adduct with methyl acrylate. The malonate 6.35 was synthesized by carboxyalkylation followed by a Stille cross coupling reaction. DA reactions with methyl acrylate were carried out in which evidence of a DA adduct was observed in the 1H NMR spectrum but attempts of its purification proved futile. DA reactions with N-phenylmaleimide provided the corresponding DA adduct in 77% yield. Quantum chemical calculations reveal that the two dienes 6.20 and 6.36 have termini that are significantly different and would suggest that FMO interactions would be a determining factor in the regioselectivity of Diels-Alder cycloadditions. In the case of acrolein, inspection of the MO coefficients predicts that the C-2 cycloadducts would be the major regioisomer. TS calculations agree with the qualitative interpretation that FMO arguments provide.