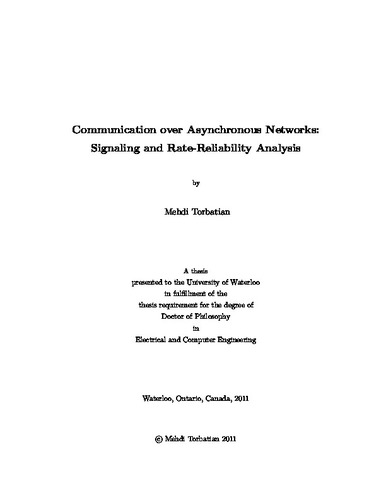 Asynchronism inherently exists in many communication systems specially in multi-terminal networks mainly due to the effect of multi-path and propagation delay. While in theoretical analysis of communication systems perfect synchronization of the terminals is often presumed, in some cases in which the nodes are randomly distributed over a geometrical area, it might be impossible to synchronize the nodes even if an ideal infrastructure service provider is used. In this work, two major categories of multi-user communication systems, i.e., relay networks and interference channels, are considered and the effect of the asynchronism among the terminals on characteristic properties of these channels are investigated. In Chapter 2, the construction of distributed space-time codes for a general two-hop asynchronous cooperative relay network is considered. A novel algebraic structure is proposed and shown to achieve full diversity for arbitrary number of relays, arbitrary input alphabets, and arbitrary delay profiles among the relays. Unlike previously proposed delay tolerant schemes, the new design has minimum length which translates into smaller decoding complexity at the same transmission rate. Full-rate and full-diversity are achieved by the new designs with or without the use of guard intervals between successive transmissions. Simulation results confirm the mathematical analysis of the proposed codes. In Chapter 3, the underlying asynchronous network is examined for various relaying protocols such as non-orthogonal selection decode-and-forward, orthogonal selection decode-and-forward, non-orthogonal amplify-and-forward (NAF), and orthogonal amplify-and-forward (OAF). The transmitter nodes send pulse amplitude modulation (PAM) signals, in which information symbols are linearly modulated by a shaping waveform to be sent to the destination, asynchronously. We consider two different cases with respect to the type of the shaping waveforms used in the structure of the PAM signals. In the theoretical case where band-limited shaping waveforms are used, it is shown that the asynchronism does not affect the DMT performance of the system and the same DMT as that of the corresponding synchronous network is obtained for all the aforementioned protocols. In the practical case where time-limited shaping waveforms are used, it is shown that better diversity gains can be achieved at the expense of a bandwidth expansion. More precisely, in the decode-and-forward type protocols, the asynchronous network provides a better diversity gain than that of the corresponding synchronous network throughout the range of the multiplexing gain. In the amplify-and-forward type protocols, the asynchronous network provides the same DMT as that of the corresponding synchronous counterpart under the OAF protocol; however, a better diversity gain is achieved under the NAF protocol throughout the range of the multiplexing gain. In particular, in the single relay asynchronous network, the NAF protocol provides the same DMT as that of the 2 × 1 multiple-input single-output channel. In Chapter 4, a constant K-user interference channel in which the users are not symbol synchronous is considered. It is shown that the asynchronism among the users does not affect the total number of degrees of freedom (DOF) of this channel; however, it facilitates aligning interfering signals at each receiver node. To achieve the total K/2 DOF of this channel when single antenna nodes are used, a novel practical interference alignment scheme is proposed wherein the alignment task is performed with the help of asynchronous delays which inherently exist among the received signals at each receiver node. The asynchronism causes inter-symbol-interference (ISI) among transmitted symbols by different transmitters resulting in the underlying quasi-static links to be converted to ISI and accordingly into time varying channels. It is proved that this conversion solves the lack of channel variation required for the interference alignment in quasi-static scenarios. When each node is equipped with M > 1 antennas, it is argued that the same alignment scheme proposed for the single antenna nodes’ interference channel is sufficient to achieve the total MK/2 DOF of the medium provided that each pair of the transmitters and the receivers experience the same asynchronous delay for all the corresponding antennas. In contrast to previously proposed alignment schemes, the channel state information of the links does not need to be known at the transmitter nodes. Instead, the relative delays among the received signals at each receiver node are globally known to the entire network. While the asynchronism is usually treated as a troublesome factor in communication systems, in this dissertation, we are interested to introduce it as a useful property of the wireless medium similar to the fading which can improve the system performance in some communication scenarios or facilitate signaling over the medium in some other scenarios.