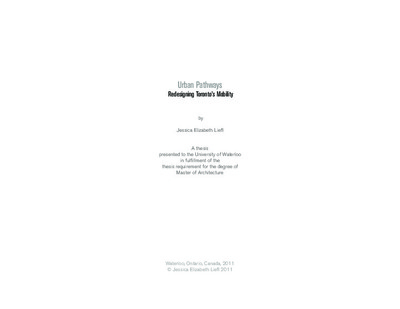 As an increasing proportion of the world’s population travels ever-longer distances between their home and place of work, urban mobility networks have had to cope with this dramatic increase in movement. These networks not only occupy escalating amounts of undeveloped land, but also work to re-shape the public spaces and landscapes of the urban realm. The City of Toronto’s mobility (or increasing lack thereof) has an enormous influence on its culture and urban development; the car and its attendant infrastructures heavily govern the city’s growth by supporting urban sprawl. In order to redevelop public space, equalize access to mobility, and improve the way we move through the city, a new system of infrastructure is required; one that can negotiate through an asphalt-dominated landscape while creating a sustainable transport alternative. This thesis proposes new mobility networks as strategies of intensification through a repositioning of the bicycle and by prioritizing its supporting infrastructure along existing underutilized service lands in the City of Toronto. By further developing both the rail and hydro corridors as a city-wide network of mobility paths, and eventually phasing them into a series of linear parkways, distant parts of the city would become accessible for long-haul trips. The second design component is a series of bicycle hubs located at, and tailored to, strategic locations throughout the city’s existing corridors and transit lines. These new civic amenities have the potential to enrich urban placemaking, while acting as social centres that anchor newly connected communities.