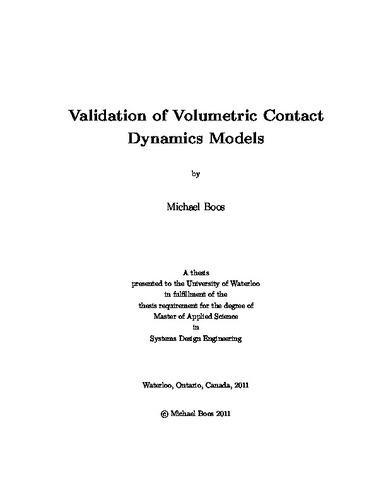 A volumetric contact dynamics model has been proposed by Gonthier et al. [1, 2, 3] for the purpose of rapidly generating reliable simulations of space-based manipulator contact dynamics. By assuming materials behave as a Winkler elastic foundation model, forces and moments between two bodies in contact can be expressed in terms of the volume of interference between the undeformed geometries of the bodies. Friction between bodies is modelled by a dwell-time dependent bristle model for both tangential friction, and spinning friction torque. This volumetric model has a number of advantages. Unlike point-contact models, it allows for the modelling of contact between complex geometries and scenarios where the contact surface is relatively large, while being less computationally expensive than finite element methods. Rolling resistance is included in the model through damping effects across the volume of interference. The friction model accounts for dwell-time dependent slip-stick effects, spinning friction torque, and the Contensou effect. In this thesis, an experimental validation of the volumetric contact model is presented for the first time. Models for simple geometries in contact (e.g. cylinder-on-plane, sphere-on-plane) have been developed for stationary contact and for contact with motion normal and tangential to the contact surface. Tangential motion is modelled with pure translation, pure rotation about the normal axis, and combined motion, in order to separately consider friction forces, spinning friction torque, and the Contensou effect, respectively. An apparatus has been developed to experimentally validate these models for metal-on-metal contact. The apparatus has two configurations, one for validating the normal contact models and the other for the friction models. Experimental measurements of forces and displacements are used to identify model parameters (e.g. volumetric stiffness, friction coefficients, etc.). For normal force experiments, modelling the contact forces as proportional to volume of interference was found to be a reasonable approximation. A Hertzian model was compared with the volumetric model for spherical payloads loaded quasi-statically. Using stiffnesses estimated from spherical experiments, small misalignments of the cylindrical payloads were estimated that corresponded well with measured results. Dynamic experiments suggest an inverse relationship between impact velocity and the hysteretic damping coefficient. The high normal forces applied in the friction experiments were found to create significant wear on the contact surfaces. Coefficients of friction between titanium and aluminum were found to be consistent translationally and rotationally. Friction forces from combined translation and rotation demonstrate that the Contensou effect is accurately described by the volumetric contact model.