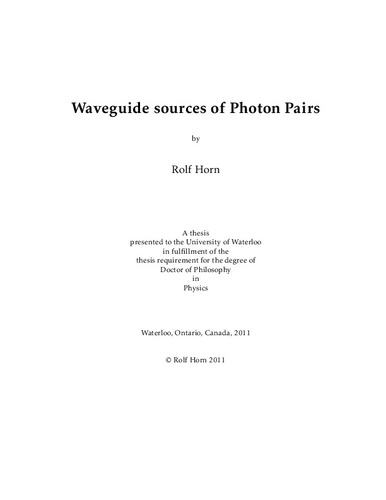 This thesis describes various methods for producing photon pairs from waveguides. It covers relevant topics such as waveguide coupling and phase matching, along with the relevant measurement techniques used to infer photon pair production. A new proposal to solve the phase matching problem is described along with two conceptual methods for generating entangled photon pairs. Photon pairs are also experimentally demonstrated from a third novel structure called a Bragg Reflection Waveguide (BRW). The new proposal to solve the phase matching problem is called Directional Quasi-Phase Matching (DQPM). It is a technique that exploits the directional dependence of the non-linear susceptiblity ($\chi^{(2)}$) tensor. It is aimed at those materials that do not allow birefringent phase-matching or periodic poling. In particular, it focuses on waveguides in which the interplay between the propagation direction, electric field polarizations and the nonlinearity can change the strength and sign of the nonlinear interaction periodically to achieve quasi-phasematching. One of the new conceptual methods for generating entangled photon pairs involves a new technique that sandwiches two waveguides from two differently oriented but similar crystals together. The idea stems from the design of a Michelson interferometer which interferes the paths over which two unique photon pair processes can occur, thereby creating entanglement in any pair of photons created in the interferometer. By forcing or sandwiching the two waveguides together, the physical space that exists in the standard Micheleson type interferometer is made non-existent, and the interferometer is effectively squashed. The result is that the two unique photon pair processes actually occupy the same physical path. This benefits the stability of the interferometer in addition to miniaturizing it. The technical challenges involved in sandwiching the two waveguides are briefly discussed. The main result of this thesis is the observation of photon pairs from the BRW. By analyzing the time correlation between two single photon detection events, spontaneous parametric down conversion (SPDC) of a picosecond pulsed ti:sapph laser is demonstrated. The process is mediated by a ridge BRW. The results show evidence for type-0, type-I and type-II phase matching of pump light at 783nm, 786nm and 789nm to down converted light that is strongly degenerate at 1566nm, 1572nm, and 1578nm respectively. The inferred efficiency of the BRW was 9.8$\cdot$10$^{-9}$ photon pairs per pump photon. This contrasts with the predicted type-0 efficiency of 2.65$\cdot$10$^{-11}$. This data is presented for the first time in such waveguides, and represents significant advances towards the integration of sources of quantum information into the existing telecommunications infrastructure.