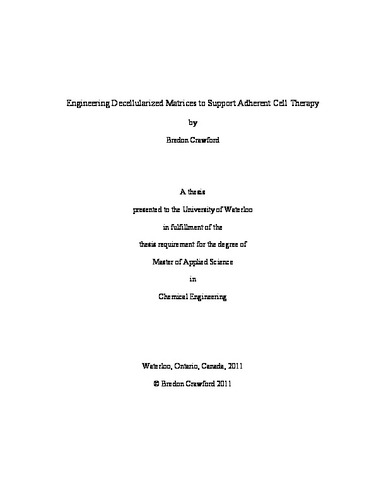 Whole-organ perfusion decellularization was performed with rat hearts on a modified chromatography apparatus. Analysis of the flow properties and effluent material over time provided insights into the decellularization process, and allowed non-destructive testing of perfused cardiac tissue. Decellularized matrices were stored for up to 1 year at -80°C and then conditioned to remove residual detergent and cryoprotectant. Tissue was reseeded with canine blood outgrowth endothelial cells (BOECs) and cultured in an autoclavable closed-circuit bubble-free reactor. The entire process was considered in the context of eventual scale-up in equipment design, the use of disposable components, and extracellular matrix (ECM) product storage. Tissue patch substrates for cell growth were studied for cytotoxic effects towards process development. Decellularization protocols were compared. Extracellular matrix derived coatings and gels were investigated as process assays and potential cell delivery vehicles. Peracetic acid and UV disinfection were tested. Micronized ECM carriers were developed for scalable culture, with considerations to carrier morphology, cell attachment, and egress. Micronized ECM carriers were tested with a novel in vitro assay to simulate the support of adherent cells for gene-modified cell therapy.