A Model of Ambulance Deployment: A Case Study for the Region of Waterloo EMS 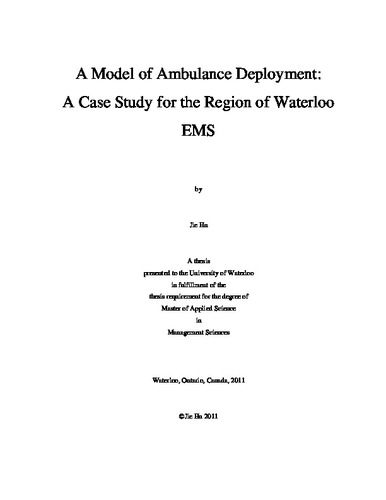 In this thesis, we propose an optimization model to assist the Region of Waterloo Emergency Medical Services (EMS) to meet the new provincial land ambulance response time standard. The new land standard requires multiple response time thresholds which are based on the acuity of the patient determined at the time the 911 call is made. The performance of an EMS system is affected by many factors, including the number of ambulances deployed, their locations, and the dispatching strategy that is employed. The number of ambulances available over the course of the day varies when ambulance crews start and end their shifts, and when ambulance crews are called out or return from a call. In order to maintain coverage, it is therefore desirable to locate ambulances in stations as a function of how many are available, and the geography and frequency of potential calls. This may result in relocation of ambulances whenever there is a change in the number of available vehicles. This research provides a compliance table indicating how many ambulances to locate at each station when the number of available ambulances is given. We explore two main objectives: 1) maximizing the expected coverage for all patients, and 2) maximizing the coverage for the most acutely ill patients. Constraints include the number of available ambulances, the response time requirements, and service level constraints for each acuity level. In this study, we conducted an empirical analysis of ambulance response times, travel times to a hospital, and time spend at the hospital. We used two years of EMS data from July 2006 to June 2008 for the Region of Waterloo (ROWEMS). Based on this study, we show that using the binomial distribution to represent the number of busy ambulances suggested by Gendreau et al. (2006) is only valid for low utilization rates. The problem of allocating available ambulances among candidate stations is formulated as a Mixed Integer Non-linear Problem (MINLP) model that includes the priority of calls and multiple daytime periods. Computational results using the ROWEMS data will be presented. A detailed comparison shows that the predictions obtained from our model are often as good as the Approximate Hypercube (AH) model, but with a simpler and quicker procedure. The model proposed in this thesis can also be used as a planning tool to find promising candidate locations for new ambulance stations.