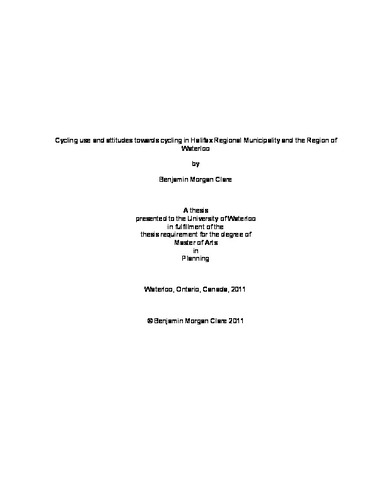 The purpose of this thesis is to explore bicycle use and attitudes towards cycling through case study analyses in Halifax Regional Municipality and the Region of Waterloo. There are two main sections of analyses; the first investigates factors that have been shown by previous research to be associated with cycling behavior for each of the study areas, and the second focuses on the results of a bicycle survey administered for the purpose of this research. The statistical analysis in Part 1 applies Fisher’s Exact Test to reveal statistically significant associations in the survey data. These two sections of analysis are compared and the following conclusions offered: 1. Cycling use is likely associated with city size, density, weather, topography, age, and gender. 2. Cycling trip purpose in Halifax is associated with weather; in Waterloo, trip purpose is associated with weather, gender, and employment. 3. Cycling use in Waterloo is associated with weather, age, gender, employment, and income. 4. There is strong evidence that the provision of bicycle infrastructure has a strong association with bicycle use. In the context of increasing bicycle use, the principal finding is the association between the provision of bicycle infrastructure and increased cycling use. In Waterloo, where the rate of cycling use is higher than in Halifax, there is approximately twice the total number of kilometres of on-street bicycle routes and respondents reported living significantly closer to bike paths, lanes, or trails. In Halifax, where cycling use is less common, respondents expressed much more concern regarding inadequate cycling infrastructure and an overall dissatisfaction with the quality of cycling facilities. These findings reaffirm the previous research suggesting that the provision of more bicycle lanes, paths, route signage, and parking facilities is associated with higher rates of bicycle use among the general public.

Benjamin Clare (2011). Cycling use and attitudes towards cycling in Halifax Regional Municipality and the Region of Waterloo. UWSpace. http://hdl.handle.net/10012/5901