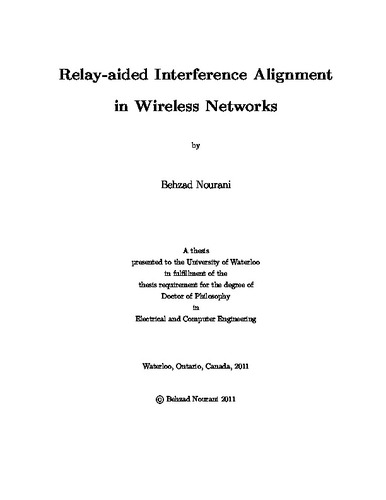 Resource management in wireless networks is one of the key factors in maximizing the overall throughput. Contrary to popular belief, dividing the resources in a dense network does not yield the best results. A method that has been developed recently shares the spectrum amongst all the users in such a way that each node can potentially utilize about half of all the available resources. This new technique is often referred to as Interference Alignment and excels based on the fact that the amount of the network resources assigned to a user does not go to zero as the number of users in the network increases. Unfortunately it is still very difficult to implement the interference alignment concepts in practice. This thesis investigates some of the low-complexity solutions to integrate interference alignment ideas into the existing wireless networks. In the third and fourth chapters of this thesis, it is shown that introducing relays to a quasi-static wireless network can be very beneficial in terms of achieving higher degrees of freedom. The relays store the signals being communicated in the network and then send a linear combination of those signals. Using the proposed scheme, it is shown that although the relays cannot decode the original information, they can transform the equivalent channel in such a way that performing interference alignment becomes much easier. Investigating the required output power of the relays shows that it can scale either slower or faster than the output power of the main transmitters. This opens new doors for the applications that have constraints on the accessible output powers in the network nodes. The results are valid for both $X$ Channel and Interference Channel network topologies. In Chapter Five, the similarities between full-duplex transmitters and relays are examined. The results suggest that the transmitters can play the relay roles for offering easier interference alignment. Similar to the relay-based alignment, in the presented scheme full-duplex transmitters listen to the signals from other transmitters and use this information during the subsequent transmission periods. Studying the functionality of the full-duplex transmitters from the receivers' side shows the benefits of having a minimal cooperation between transmitters without even being able to decode the signals. It is also proved that the degrees of freedom for the $N$-user Interference Channel with full-duplex transmitters can be $\sqrt{\frac{N}{2}}$. The results offer an easy way to recover a portion of degrees of freedom with manageable complexity suited for practical systems.