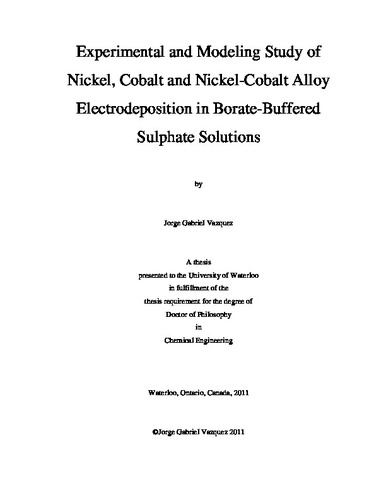 Nowadays, the development of novel materials involves diverse branches of science as a consequence of the new requirements imposed by modern society. This includes aspects ranging from the optimization of the manufacturing processes to the durability of the materials themselves. Ideally, some synergism should exist between the durability, the properties of interest in the material. Although metals in their pure state are often desired, the best properties or combination of properties often cannot be satisfactorily achieved with a single metal. In these situations, the desired properties can be attained by the formation of alloys of these metals with others. Ni-Co alloys are no exceptions and so have received considerable attention especially in microsystem technology due to the magnetic properties of cobalt and the corrosion and wear resistance of nickel. Moreover, this interest has been further stimulated by its use in the manufacture of sensors, magnetic devices, microrelays, inductors, actuators, memory devices and hard drives. The fabrication of these alloys (particularly coatings) via electroplating has been shown to be techno-economically feasible in comparison with other processes: capability of high volume production, low cost and the ability to coat thin layers on non-planar substrates. In addition, the materials fabricated by this technology exhibit excellent characteristics such as refined grain structure, smoothness, low residual stress and coercivity, etc., making them advantageous to materials produced by other physical methods of deposition. Nevertheless, one of the biggest problems faced during the formation of Ni-Co alloys is its anomalous behavior whereby cobalt preferentially deposits over nickel under most conditions, even when the Ni(II) concentration is significantly higher than that of Co(II). This problem has complicated the prediction and control of the metal composition in these alloys during their production and as a consequence the ability to obtain the desirable properties associated with high nickel content. Although this problem is not recent, the studies that have been carried out so far to analyze this system have not always been as comprehensive as they could be in terms of the experimental conditions investigated or the reaction mechanisms and mathematical models developed to describe its behavior. Consequently, the origin of this behavior is still not completely understood. Thus, this work presents a contribution in terms of the analysis of the reaction mechanisms for single metal deposition of nickel and cobalt and for the formation of Ni-Co alloys in sulphate media with the intention of gaining a better understanding of the phenomena controlling the anomalous behavior of this system. Analyses of the single metal deposition of nickel and cobalt are first carried out to better understand their reaction mechanisms. Such an approach should allow the contributions of the reduction of each metal ion and interactions between the two systems during alloy co-deposition to be more clearly understood. In order to analyse the aforementioned systems, both steady state and transient techniques are employed. Among these techniques, electrochemical impedance spectroscopy (EIS) is employed since it is a robust and powerful method to quantitatively characterize the various relaxation phenomena occurring during the electrodeposition of metals. The experimental data acquired from this technique are analyzed with comprehensive physicochemical models and the electrochemical processes are quantified by fitting the models to these data to determine the kinetic parameters. During the development of the physicochemical models, several assumptions (e.g. neglect of convection, homogeneous reactions and single electron-transfer steps) made in former models are relaxed in order to investigate their combined impact on the predicted response of the system. Estimates of the kinetic parameters determined by EIS for the deposition of the single metals reveals that the first step of Co(II) reduction is much faaster tha the corresponding step of Ni(II) reduction. Some limitations of the EIS technique (i.e. analysis at high overpotentials) are exposed and compared in the case of the nickel deposition using linear sweep voltammetry (LSV). Likewise, physicochemical models accounting for most of the important phenomena are derived and fitted to experimental data. Ni-Co alloy formation is analyzed using LSV and steady state polarization experiments for different pH, current density and electrolyte composition. Current efficiencies for metal depsoition and alloy composition are also evaluated. To date, no experimental study considering all these variables has been reported in the literature. Then a steady state model is presented to describe the electrode response during alloy formation and used to provide insight into the anomalous behavior of this system. This model is based on information obtained from previous studies reported in the literature and from the current research. After being fitted to the experimental data, the model reveals that the anomalous behavior observed for this alloy is likely caused by the much faster charge-transfer of Co(II) reduction than that of Ni(II) reduction and not by other previously proposed mechanisms such as competition between adsorbed species for surface sites, formation of aqueous hydroxides (MeOH+) or mixed intermediate species (NiCo(III)ads) on the surface of the electrode.