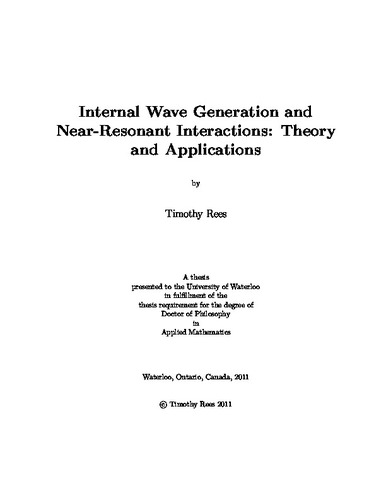 Near-resonant triad interactions and wave generation theory are investigated for continuously stratified fluids. Interaction equations are derived for spatially-varying wave trains under the inviscid Boussinesq approximation. Rotational effects are included, and properties of the underlying eigenvalue problem are explored. To facilitate a numerical study of the near-resonant interactions, numerical methods are developed and an analysis of wave generation on a periodic domain is performed. Numerical experiments using laboratory and ocean-scale parameters are conducted, and the simulations confirm the validity of the wave forcing theory. Interaction experiments demonstrate a strong tendency for waves to exhibit nonlinear behaviour. While resonant interactions are observed in the laboratory scale simulations, nonlinear steepening effects and the formation of solitary-like waves dominate the ocean-scale experiments. The results suggest that the weakly-nonlinear interaction theory is only appropriate in a limited parameter regime. The problem of analyzing forced wave equations on an infinite domain is also considered. Motivated by the results obtained on a periodic domain, asymptotic analysis is applied to three important wave equations. The method of steepest descents is used to determine the large-time behaviour for the linearized Korteweg-de Vries, Benjamin-Bona-Mahony, and internal gravity wave equations. The asymptotic results are compared with numerical experiments and found to agree to high precision.