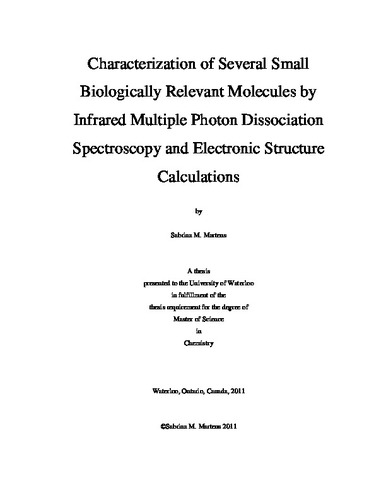 Infrared multiple photon dissociation (IRMPD) spectroscopy has been coupled with electronic structure calculations in order to elucidate the structures of several small biological molecules including: uracil, 5-fluorouracil, 5-fluorocytosine, ferulic acid, and a number of their related analogs. IRMPD is a powerful technique, that when combined with electronic structure calculations can provide convincing evidence for the structural characterization of ions in the gas phase. Isomers of uracil and 5-fluorouracil (5-FU) have been characterized by calculations performed at the MP2(full)/aug-cc-pVTZ level of theory; however, infrared multiple photon dissociation spectroscopy experiments proved to be unsuccessful for these species. Geometry optimization and frequency calculations have isolated the dominant isomer(s) for neutral and deprotonated uracil and 5-fluorouracil, along with several cluster interactions involving water, methanol, ammonia, and methylamine. For both uracil and 5-FU, a single relevant neutral isomer was determined, with each isomer existing in the diketo, as opposed to the enol form. Following the deprotonation of this neutral isomer, both uracil and 5-FU were permitted to form anionic cluster ions with water, methanol, ammonia, or methylamine, and based on the relative Gibbs free energies (298 K) of the calculated isomers, relevant cluster interactions were determined. For each cluster, several sites of intramolecular interaction were found to exist; however, interaction at the site of deprotonation was the most favourable in every instance. Ionic hydrogen bond interactions have been found in several clusters formed by 5-fluorocytosine (5-FC). The chloride and trimethylammonium cluster ions, in addition to the cationic and anionic dimers have been characterized by infrared multiple photon dissociation (IRMPD) spectroscopy and electronic structure calculations performed at the B2PLYP/aug-cc-pVTZ//B3LYP/6-311+G(d,p) level of theory. IRMPD spectra in combination with calculated spectra and relative energetics have indicated, quite conclusively, that a single isomer for each 5-FC cluster that is likely being observed experimentally except in the case of the anionic dimer, in which a combination of isomers is probable. For the 5-FC-trimethylammonium cluster specifically, the calculated spectrum of the lowest energy isomer matches the experimental spectrum remarkably well. Interestingly, the cationic dimer of 5-FC was found to have a single energetically relevant isomer (Cationic-IV) in which a unique tridentate ionic hydrogen bond interaction is formed. The three sites of intramolecular ionic hydrogen bonds in this isomer interact very efficiently, leading to a significantly large calculated enthalpy of binding of 180 kJ/mol. The magnitude of the calculated binding energy for this species, in combination with the strong correlation between the simulated and IRMPD spectra, indicates that the tridentate-bound dimer is observed predominantly in experiment. Comparison of the calculated relative Gibbs free energies (298 K) for this species with several of the other isomers considered also supports the likelihood of the dominant protonated dimer existing as Cationic-IV. Protonated ferulic acid has been characterized using infrared multiple photon dissociation spectroscopy and electronic structure calculations at the B3LYP/6-311+G(d,p) level of theory. Neutral ferulic acid has been determined to undergo protonation on the carbonyl oxygen of the acid group, forming an ion of m/z 195. Due to its extensively conjugated structure, protonated ferulic acid (m/z 195) is observed to yield three stable fragment ions in IRMPD experiments. It is proposed that two parallel fragmentation pathways of protonated ferulic acid are being observed. First, proton transfer occurs from the carbonyl oxygen to the hydroxyl oxygen within the acid group, resulting in the loss of water and subsequently carbon monoxide, forming ions of m/z 177 and 149, respectively. The second proposed fragmentation pathway undergoes proton transfer from the phenolic group to the methoxy group resulting in loss of methanol and rearrangement to a five-membered ring of m/z 163. IRMPD spectra have been obtained for the ions m/z 195 and m/z 177, and anharmonic calculations have been performed on these species at the B3LYP/6-311+G(d,p) level of theory. The calculated anharmonic spectra for these ions match the experimental spectrum exceptionally well and strongly support the proposed fragmentation mechanisms.