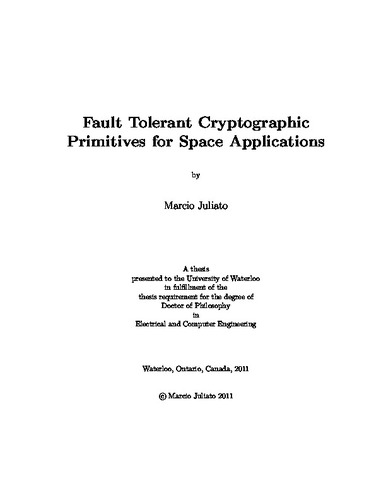 Spacecrafts are extensively used by public and private sectors to support a variety of services. Considering the cost and the strategic importance of these spacecrafts, there has been an increasing demand to utilize strong cryptographic primitives to assure their security. Moreover, it is of utmost importance to consider fault tolerance in their designs due to the harsh environment found in space, while keeping low area and power consumption. The problem of recovering spacecrafts from failures or attacks, and bringing them back to an operational and safe state is crucial for reliability. Despite the recent interest in incorporating on-board security, there is limited research in this area. This research proposes a trusted hardware module approach for recovering the spacecrafts subsystems and their cryptographic capabilities after an attack or a major failure has happened. The proposed fault tolerant trusted modules are capable of performing platform restoration as well as recovering the cryptographic capabilities of the spacecraft. This research also proposes efficient fault tolerant architectures for the secure hash (SHA-2) and message authentication code (HMAC) algorithms. The proposed architectures are the first in the literature to detect and correct errors by using Hamming codes to protect the main registers. Furthermore, a quantitative analysis of the probability of failure of the proposed fault tolerance mechanisms is introduced. Based upon an extensive set of experimental results along with probability of failure analysis, it was possible to show that the proposed fault tolerant scheme based on information redundancy leads to a better implementation and provides better SEU resistance than the traditional Triple Modular Redundancy (TMR). The fault tolerant cryptographic primitives introduced in this research are of crucial importance for the implementation of on-board security in spacecrafts.