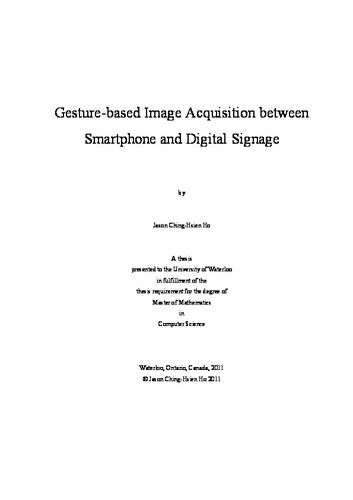 Mobile phones have formed a social network within the phone subscriber population by allowing the phone subscribers to exchange information. Nowadays, smartphones have been improved with a variety of functionalities, such as a built-in cameras, motion sensors, and Wi-Fi wireless connectivity to enable the phone subscriber to take photographs of a desired object for distribution to other users through SMS or email. These functionalities make the mobile phones the perfect tool in terms of viral marketing within cellular phone subscribers. This thesis proposes a novel methodology that allows the phone subscriber to perform gestures for image acquisition from public signage displays. The public display is signage which displays a list of images in chronological order. The signage distributes the image list to nearby phones in the form of datagrams by means of multi-casts. Additionally, Wi-Fi connection between the phone and the signage must be established to enable multi-cast. When the phone has the completed image list downloaded, the phone subscriber can point the phone at the signage and perform a dragging gesture once he sees the desired image displayed by the signage. The current state of the project has concluded the development of the application to achieve the aforementioned task. However, the development of data transmission from one phone to another is still ongoing. Further development in the future would enable another gesture for data distribution to other phones in the vicinity. Web-based administration applications have also been developed to manage the image list in the signage. Through this web-based application, the administrator can generate new image list and then upload it to a FTP server. When the updated image list is stored in a remote FTP server, the signage periodically retrieves the image list from the FTP server. After the signage has received the updated image list, it then distributes the image list in the form of datagrams by means of multicasts. In summary, this thesis documents the impact of such technology in viral marketing research.