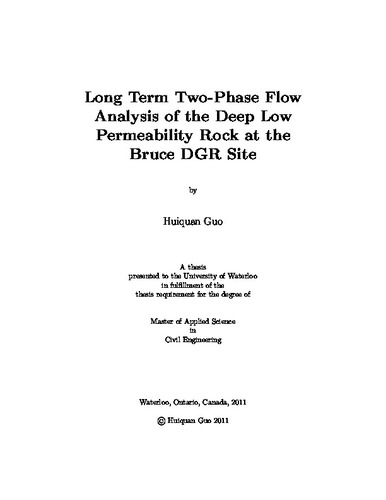 Abnormal pressures have been measured in the deep boreholes at the Bruce site, southern Ontario, where a deep geologic repository for low and intermediate level radioactive waste disposal has been proposed. The pressure regime in the stratigraphic units exhibits either higher than hydrostatic pressure (over-pressured) or lower than hydrostatic pressure (under-pressured) are considered to be abnormal. At the Bruce site, the Ordovician sediments are under-pressured while the underlying Cambrian sandstone and the overlying Guelph carbonate are over-pressured. Hypotheses have been documented in literature to explain the phenomenon of abnormal pressures. These hypotheses include osmosis, glacial loading and deglaciation unloading, exhumation of overlying sediments, crustal flexure and the presence of an immiscible gas phase. Previous work on the Bruce site has shown that the under-pressures in the Ordovician limestone and shales could not be explained by glaciation and deglaciation or by saturated analyses. The presence of a gas phase in the Ordovician formations has been determined to be a reasonable cause of the under-pressure developed in the Ordovician shales and limestones at the Bruce site. Support for the presence of a gas phase includes solution concentrations of methane, concentrations of environmental isotopes related to methane and estimates of water and gas saturations from laboratory core analyses. The primary contribution of this thesis is the sensitivity analyses performed on the hydrogeologic parameters with respect to a one dimensional two-phase flow model. First, a one dimensional two-phase air and water flow model was adopted and reconstructed to simulate the long-term evolution of the groundwater regimes at the DGR site. Then the hydrogeologic parameters which impact the presence of under-pressure in the groundwater are investigated. Data required to quantify the properties of geologic media and groundwater are adopted directly from borehole testing and laboratory testing results. The permeable boundaries of the domain are assumed to be water saturated and pressure specified (using hydrostatic conditions in the Guelph Formation and hydrostatic with 120 m over-pressure condition in the Cambrian and Precambrian). Isothermal conditions were assumed, thus constant water density and viscosity values are estimated for the average total dissolved solids (TDS) concentration of the modelled stratigraphic column. A constant diffusion coefficient (a diffusivity of $0.25\times10^{-8}$ m$^2$/s) of air in water is assumed with a saturation-dependent tortuosity. The air generation rate is assumed to simulate the gas phase generated in the Ordovician formations. The numerical simulation of up to 4 million years provides a means to explore the behaviour of gas phase dissipation due to partitioning into the water phase and diffusive transport in the solute phase. Results confirmed that the presence of a gas phase would result in the under-pressure in water.