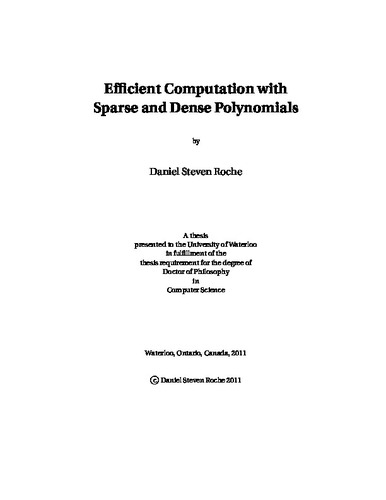 Computations with polynomials are at the heart of any computer algebra system and also have many applications in engineering, coding theory, and cryptography. Generally speaking, the low-level polynomial computations of interest can be classified as arithmetic operations, algebraic computations, and inverse symbolic problems. New algorithms are presented in all these areas which improve on the state of the art in both theoretical and practical performance. Traditionally, polynomials may be represented in a computer in one of two ways: as a "dense" array of all possible coefficients up to the polynomial's degree, or as a "sparse" list of coefficient-exponent tuples. In the latter case, zero terms are not explicitly written, giving a potentially more compact representation. In the area of arithmetic operations, new algorithms are presented for the multiplication of dense polynomials. These have the same asymptotic time cost of the fastest existing approaches, but reduce the intermediate storage required from linear in the size of the input to a constant amount. Two different algorithms for so-called "adaptive" multiplication are also presented which effectively provide a gradient between existing sparse and dense algorithms, giving a large improvement in many cases while never performing significantly worse than the best existing approaches. Algebraic computations on sparse polynomials are considered as well. The first known polynomial-time algorithm to detect when a sparse polynomial is a perfect power is presented, along with two different approaches to computing the perfect power factorization. Inverse symbolic problems are those for which the challenge is to compute a symbolic mathematical representation of a program or "black box". First, new algorithms are presented which improve the complexity of interpolation for sparse polynomials with coefficients in finite fields or approximate complex numbers. Second, the first polynomial-time algorithm for the more general problem of sparsest-shift interpolation is presented. The practical performance of all these algorithms is demonstrated with implementations in a high-performance library and compared to existing software and previous techniques.