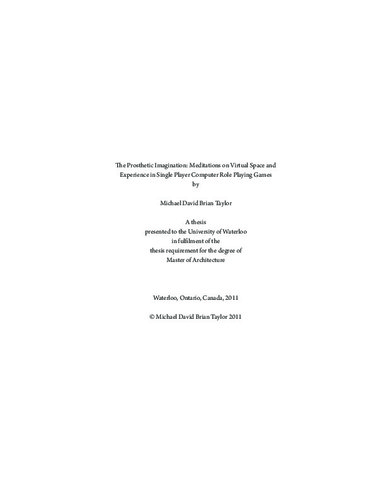 Today’s video game players sit in front of their screens immersing themselves within the fictional environment of the video game. They connect their physical self to the game-controller and their cerebral self to the game-world. The video game medium becomes a cybernetic and psychological appendage, a prosthesis that allows game players to share their consciousness across actual and virtual realities. Such an appendage has the ability to expand the personal spatial environment of the game players as they navigate the spaces of an increasingly complex, digitally constructed extension of the imagination. The thesis begins with an autobiographical summary of personal experiences in the suburbs and the resultant escape from suburbia that video games provide. The thesis then presents a series of experiential diaries generated from gameplay. This is followed by a conceptual analysis that uses six meditations to discuss the spaces and experiences presented in the diaries. The purpose of the conceptual analysis is to investigate how the narrative and spatial experiences of single player role playing video games expand our perceptions of architecture and space beyond the real-world. The spaces of these games represent a new way of thinking about, experiencing and creating architecture.