Effects of Aging in Reaching and Grasping Movements: A Kinematic Analysis of Movement Context 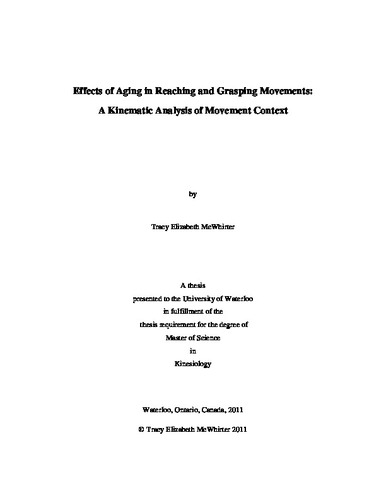 Although several studies have investigated the effects of aging on aspects of motor planning and control, there remains a lack of consensus about the underlying mechanisms responsible for the motor slowing associated with aging. This may, at least partially, be due to the fact that few studies have kinematically examined both the transport and grasp components in both younger and older adults, and furthermore, even fewer have examined these movements when the context of the task is changed, such as when the movement is performed in isolation compared to when it is embedded in a sequence. Therefore, the purpose of this thesis was threefold: 1) to investigate how aging affects performance on a single reach-to-grasp movement, 2) to examine how movement context affects performance on the reach-to-grasp movement when it is performed alone or as the first movement in a two-movement sequence- in other words, are older adults able to plan the first motor task movement in anticipation of performing a subsequent task, and 3) whether younger and older adults are able to plan, execute, and modify that movement in accordance with the extrinsic properties of the subsequent movement task (near versus far target for second movement). To address this, the movement profiles of both younger (N=14; mean age= 20.7 years; 4 males, 10 females) and older (N=11; mean age= 75.1 years; 3 males, 8 females) healthy right-handed adults were compared on performing a reach-to-grasp movement under 3 different movement conditions: single-movement task, two-movement sequence to near target, and two-movement sequence to far target. For the two-movement sequence conditions, participants were instructed to reach and grasp the object (like the single-movement task), but then to move and place it on either a closer (near condition) or farther (far condition) target location. Overall, the results from this study are in agreement with the literature showing older adults to have slower movements in general and consistently taking longer to both initiate and execute the reach-to-grasp movement than the younger adults for all conditions. There were no other differences between groups on the single-movement condition. For all participants, the reach-to-grasp movement took longer when it was performed in isolation than when it was embedded as the first part of a two-movement sequence. This finding can be explained by the movement termination effect and is consistent with findings from studies on aiming movements showing that when the movement plan involves stabilizing the arm at the first target (single-movement) as opposed to merely slowing it down (two-movement sequence tasks), the constraint of achieving a stabile position imposes a greater demand, thus requiring the movement iv to be made more slowly. The results obtained from the study indicate that the movement termination effect is also seen in the context of prehensile movements and furthermore, this effect on performance persists with age. Not only do the findings from this study show that this effect persists with age, but also that this effect increases with age, as revealed by a Group by Condition effect for reaction time, movement time, and relative timing of the velocity profile, indicating greater changes in reaching performance between single- and two-movement conditions for the older adults than for the younger adults. Upon further examination of the details of the movement, it is apparent this movement termination effect is reflected in the ballistic phase of the movement. This last notion is inconsistent with previous studies, which showed the increased movement time associated with the movement termination effect was the result of changes in the amount of time spent in the deceleration phase toward the end of the movement rather than the beginning of the movement. Lastly, when reach-to-grasp performance was compared between moving to a near- compared to a far-target in the two-movement conditions, no differences were found between any of the movement features for either group. This suggests that the increased proportion of time spent in deceleration for the dual-movement conditions compared to the single-movement condition in older adults is due to online feedback control for terminating the first movement rather than online planning of the second movement. Despite the changes seen in the transport component, the findings for the manipulation component indicate that the formation of the grasp and its relative coupling with the transport component remains intact with age.