Enumeration of Factorizations in the Symmetric Group: From Centrality to Non-centrality 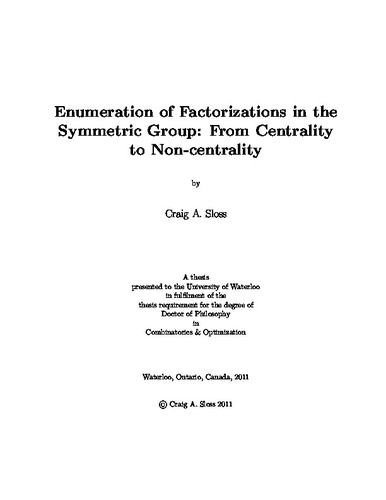 The character theory of the symmetric group is a powerful method of studying enu- merative questions about factorizations of permutations, which arise in areas including topology, geometry, and mathematical physics. This method relies on having an encoding of the enumerative problem in the centre Z(n) of the algebra C[S_n] spanned by the symmetric group S_n. This thesis develops methods to deal with permutation factorization problems which cannot be encoded in Z(n). The (p,q,n)-dipole problem, which arises in the study of connections between string theory and Yang-Mills theory, is the chief problem motivating this research. This thesis introduces a refinement of the (p,q,n)-dipole problem, namely, the (a,b,c,d)- dipole problem. A Join-Cut analysis of the (a,b,c,d)-dipole problem leads to two partial differential equations which determine the generating series for the problem. The first equation determines the series for (a,b,0,0)-dipoles, which is the initial condition for the second equation, which gives the series for (a,b,c,d)-dipoles. An analysis of these equa- tions leads to a process, recursive in genus, for solving the (a,b,c,d)-dipole problem for a surface of genus g. These solutions are expressed in terms of a natural family of functions which are well-understood as sums indexed by compositions of a binary string. The combinatorial analysis of the (a,b,0,0)-dipole problem reveals an unexpected fact about a special case of the (p,q,n)-dipole problem. When q=n−1, the problem may be encoded in the centralizer Z_1(n) of C[S_n] with respect to the subgroup S_{n−1}. The algebra Z_1(n) has many combinatorially important similarities to Z(n) which may be used to find an explicit expression for the genus polynomials for the (p,n−1,n)-dipole problem for all values of p and n, giving a solution to this case for all orientable surfaces. Moreover, the algebraic techniques developed to solve this problem provide an alge- braic approach to solving a class of non-central problems which includes problems such as the non-transitive star factorization problem and the problem of enumerating Z_1- decompositions of a full cycle, and raise intriguing questions about the combinatorial significance of centralizers with respect to subgroups other than S_{n−1}.

Craig Sloss (2011). Enumeration of Factorizations in the Symmetric Group: From Centrality to Non-centrality. UWSpace. http://hdl.handle.net/10012/5859