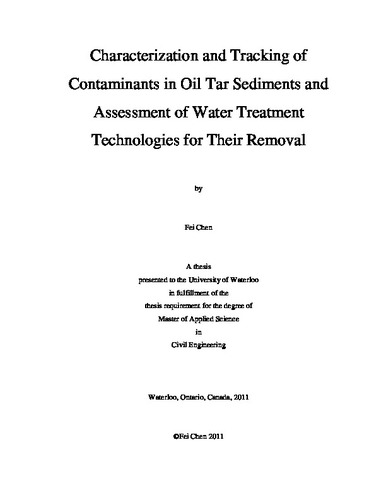 Between 1920 and 1950 an oil gasification plant operated on a property adjacent to Kettle Creek about 0.2 km from the mouth of Port Stanley harbour on Lake Erie, Ontario, Canada. Oil tar wastes from the gasification plant were stored on the site until it was eventually abandoned in 1987. At that time the Ontario Ministry of the Environment (MOE) determined that the site was contaminated with heavy metals and polycyclic aromatic hydrocarbons (PAHs) and that some of this waste had been flowing into Kettle Creek through the George Street drain in the village of Port Stanley for an undetermined period of time. The site was completely remediated in 1995 and the flow of contaminated water from the drain ceased. However, sediment sampling revealed the presence of heavy metals and PAHs in Kettle Creek, the inner and outer harbours, and in Lake Erie. From a drinking water source protection perspective, there was an interest in identifying the oil tar contaminants and assessing contaminated sediment transport within the Elgin Area Water Treatment Plant intake protection zones (IPZs). The effectiveness of conventional treatment processes currently available within Elgin Area Water Treatment Plant (WTP) in removing these contaminants was also evaluated. According to historical monitoring data from various compartments including soil, sediment, groundwater and surface water, three types of contaminants were identified, including heavy metals (Sb, As, Cd, Cr, Cu, Fe, Pb, Ni, Se, V and Zn), PAHs and volatile organics (benzene, toluene, phenols). Due to extremely low toxicity and exposure probability, some unregulated contaminants (iron, vanadium, zinc, phenol and some PAHs) were removed from the final contaminant list and were not discussed from the perspective of treatment. A technique developed by the USEPA to characterize and track contaminant plumes in water, the fingerprint analysis of leachate contaminants (FALCON), was for the first time investigated for its suitability as a tool to assist with the interpretation of contaminated sediment transport in surface water originating from a former oil/coal gasification plant and its potential to help assess drinking water intake protection zones. A source fingerprint based on 4 heavy metals (As, Cr, Pb, Ni) and 6 polycyclic aromatic hydrocarbons (PAHs) from 12 sampling sites in a contaminant-impacted harbour was generated. This source fingerprint of the contaminated harbour sediments was then compared to 48 fingerprints generated at other sites in the vicinity of two intake protection zones of a drinking water treatment plant. The source fingerprint did not match fingerprints of sites upstream from the contaminant input source in the creek which fed the small harbour and other potential contamination sources to the east and west in the lake. However, the source fingerprint did match most sites in an outer harbour and some outside the harbour break walls, including sediments collected from within the drinking water intake pipe ~3 km to the east of the harbour. A high correlation between water intake sediments and the source fingerprint demonstrated that contaminated sediments have reached water intake. However, no exceedances of the target contaminants were reported in intake surface water in the period from 1990 – 2010. It was also found that the correlation between the source fingerprint and those in the intake has been decreasing over the period for which data are available, confirming the success of remediation efforts. Surface water monitoring has demonstrated that PAH concentrations are lower than detection limits and only iron (Fe) exceeds the Ontario Drinking Water Quality Standards (ODWQS) aesthetic objective. The concentrations of oil tar contaminants in treated water were all below the MOE regulated concentrations, indicating that the current Elgin Area Water Treatment Plant configuration is effectively removing any oil tar contaminants present in raw water. Critical raw water concentrations (CRWCs), which represent maximum raw water concentrations that can reliably be removed by the Elgin WTP, were predicted for each oil tar contaminant. The probability of each contaminant exceeding the CRWC was then estimated using a Log Pearson Type III distribution. Copper was found to be the contaminant with the highest exceedance probability. A point system was designed to evaluate the cost-effectiveness of other treatment alternatives and to select the most appropriate of these to improve the robustness of the WTP. Granular activated carbon (GAC) was determined to be the most cost-effective compared to other techniques and hence is considered as the most suitable technique to be implemented in the plant in order to improve its robustness as it relates to dissolved heavy metal species and PAHs.

Fei Chen (2011). Characterization and Tracking of Contaminants in Oil Tar Sediments and Assessment of Water Treatment Technologies for Their Removal. UWSpace. http://hdl.handle.net/10012/5855