Hand preference after stroke: The development and initial evaluation of a new performance-based measure 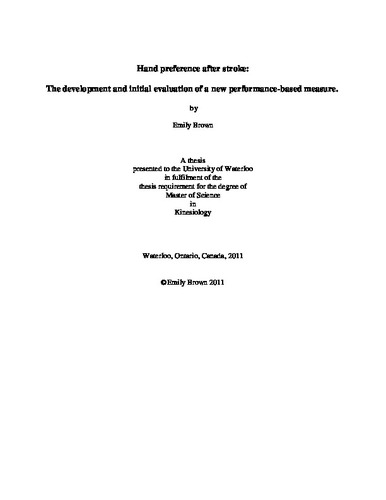 Functional recovery of the upper limb after stroke is influenced by many factors, one being amount of affected arm and hand use following stroke. In the healthy population, amount of hand use is influenced by degree of hand dominance. Depending on side of stroke and previous hand dominance, these preferences may be altered, consequently affecting the amount of upper limb use. Determining hand preference in patients after stroke, when measured, is commonly assessed with questionnaires; however, these reports are subjective and patients may have difficulty recalling from memory which hand they use for the numerous activities on the questionnaire. A preferential reaching task has been shown to correlate with the degree of hand dominance as determined by the Waterloo Handedness Questionnaire, providing an objective performance-based method to assess the continuum of hand dominance in healthy subjects. A modified version of this preferential reaching task, with varying degrees of proximal to distal control, was used to investigate the influence of impairment, pre-stroke dominance and task difficulty on affected arm reach percentage. Results of the study revealed that it is feasible to administer a modified preferential reaching task in the stroke population, as the test could be completed in less than 10 minutes with no adverse effects reported from the patients. Heterogeneity made it difficult to detect statistical effects of task difficulty and pre-stroke dominance on post-stroke preference; however, there were trends observed indicating that patients with their dominant arm affected may have greater preference for the affected arm compared to those with their non-dominant arm affected. This was despite similar impairment levels between these patient groups. Preference for the dominant arm (whether affected or unaffected) was stronger when the task was at midline or in contralateral space, and when tasks required the greatest degree of distal control. In future, the degree of hand preference measured with this tool will have important implications for identifying areas in therapy requiring greater focus as well as identifying individuals who would most benefit from therapies that promote affected arm use, such as constraint induced movement therapy