Floating Bodies in the Absence of Gravity 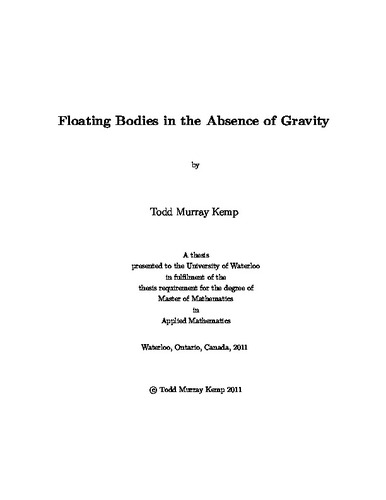 The study of infinitely long cylinders of constant cross-section floating in an infinite fluid bath in zero-gravity environments has primarily been focused on bodies whose cross-sections are strictly convex and sufficiently smooth. In this thesis, our efforts are concentrated on the consideration of bodies that are only convex and piecewise smooth. These types of bodies are seldom considered in current literature. We have worked with a series expansion of the energy function in order to determine when configurations of a given body will be in equilibrium, stable or otherwise. We have proven that any convex body with a straight side cannot float in a stable equilibrium with the fluid interface intersecting the interior of the straight side in a single point. This fact is then used to prove necessary and sufficient conditions for stable equilibrium of polygons, bodies whose cross-sections are comprised of only straight sides. We illustrate these conditions with several examples. In the latter portion of the thesis, we turn our attention to bodies in three dimensions. While past research has again been focused on strictly convex bodies, we began to consider bodies that do not meet these requirements by examining bodies of revolution. A condition for stability with respect to vertical variations of bodies of revolution is derived. We conclude with several examples of bodies of revolution, some of which interestingly relate back to an analogous two-dimensional shape.