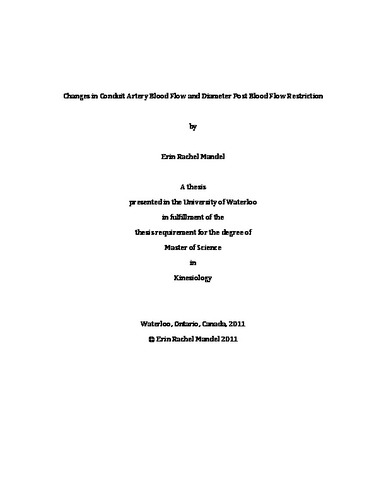 Flow mediated dilation (FMD) is a non-invasive test that assesses endothelial health and nitric oxide bioavailability; it is commonly used to examine changes in vascular health due to disease or de-conditioning. Currently, a wide variety of protocols are being used to assess upper and lower extremity conduit artery health. The current project was embarked upon to gain a better understanding of the FMD protocols currently being used to asses conduit artery FMD and how these results impact our understanding of a participant’s vascular health. More specifically occlusion duration, cuff placement and artery location were examined in three commonly examined conduit arteries. The FMD responses in the brachial artery (BA), superficial femoral artery (SFA), and popliteal artery (PA) of ten healthy men, mean age of 27, after five and/or two-minutes of distal occlusion were examined. When the two-minute protocol was performed on the SFA and PA, low-resistance static calf exercise was added to augment the shear stimulus. It was hypothesized that percent FMD and shear stress responses of the SFA and PA would not be significantly different after five-minutes of occlusion, thereby allowing leg conduit artery FMD to be performed on either artery. It was further hypothesized that there would be no significant differences between the shear stress and percent FMD responses of the leg conduit arteries after five or two-minutes of occlusion; inferring that shorter occlusion durations when combines with ischemic muscle contractions can be used to assess SFA or PA FMD. With regards to comparisons between arm and leg conduit arteries, it was hypothesized that there would be significant between limb differences in baseline diameter, FMD and shear stress post five-minutes of distal occlusion. These differences will be used to better understand the effects of artery location and size on conduit artery FMD IV responses. Limitations with the traditional edge-detection method of determining arterial diameter prompted the creation of a new method of measuring artery diameter, the center-based method. It was hypothesized that there would be no significant differences in the percent FMD and time to FMD after five-minutes of BA occlusion (n=7). The results of the current study demonstrated that five-minutes of calf occlusion elicited a significant PA FMD but not a significant SFA FMD. FMD post two-minutes of PA occlusion with exercise was not significantly different than that produced by five-minutes of occlusion. Conversely, two-minutes of calf occlusion with exercise was unable to elicit a SFA FMD response. Significant differences in shear stress and FMD were reported between arm and leg conduit arteries, demonstrating different responses to five-minutes of distal occlusion due to artery size and location. Finally, no significant differences were noted between FMD and time to FMD when the center-based or edge-detection method was used. This study has demonstrated that the calf occlusion protocol was unable to elicit a FMD response in the SFA FMD; this occlusion location is only able to elicit a PA FMD response. Furthermore, two-minutes of occlusion with one-minute of exercise can be used in place of the five-minute protocol to examine PA FMD but not SFA FMD. Differences between arm and leg conduit arteries are noted and it has been suggested that this is likely due to leg conduit artery adaptations to gravity. Lastly, preliminary data suggest that the center-based method is an appropriate method of measuring conduit artery diameter.