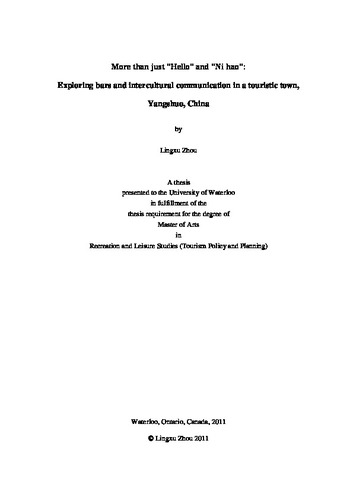 The purpose of this research is to explore the communication and interaction between westerners and Chinese people in western bars in the touristic town of Yangshuo in southern China. Yangshuo is worldly famous for its breath-taking Karst Mountains, rice fields and water buffalos. It has attracted millions of visitors annually, both domestic and international. The tourist center of Yangshuo consists of a main street, West Street, and many other small streets around it. In recent years, bars and night clubs have been established, bringing a more modern and western atmosphere to the main tourist streets that are paved in marble and lined with ancient buildings. This research is focused on bars, western bars in particular, as a unique setting for intercultural communication and interaction. First of all, this research introduces a background of intercultural communication definitions, the link between bars and tourism in China, as well as international tourism in China. With the goal of understanding the intercultural phenomena in bars through conversations and observations, I explored the role of bars in the community, the social and intercultural situations in bars, and the reflection and outcome of those communication and interaction. Field work was conducted in July and August 2010, by using both qualitative and quantitative research methods: questionnaire survey and ethnographic participant observation. I was able to obtain a broad perception of the subject as well as detailed description from participants, including myself. A broad range of literature related to bars and spaces in leisure and tourism, as well as in the fields of intercultural communication, intercultural host-guest relationship in tourism, tourism and cultural understanding, and tourist experience were reviewed. The gaps in the literature were identified. Limited research was done by addressing the actual situations of intercultural communication and linking the social and intercultural theories with actual practice, especially in a tourism context. Also, the role of western bars, as a new form of recreational, cultural and social space in China needed more attention. Chapter four and five present major findings of this research. Informants were divided into five groups: western tourists, local westerners (westerners who have become residents), Chinese tourists, Chinese students studying English in Yangshuo, and local residents. Preliminary findings from questionnaire survey indicate that westerners and Chinese people have difference reasons for visiting Yangshuo and going to bars. Bars have both social and recreational functions for westerners but are of less interest to and have more limited functions as attractions to Chinese tourists. Local residents have the least interest in western bars but Chinese students often go to them, mainly to practice English with foreigners. Detailed analysis of qualitative data suggests intercultural communication and interaction have difference purposes and styles for the different groups. Students, locals who work in the bars and local westerners have most contact with western tourists. Chinese tourists tend to interact with westerners in non-verbal ways, such as in games and photo-taking. Language is a major communication barrier but westerners made more effort to overcome this, reflecting both desire and need as visitors in a foreign land. The research findings can seek theoretical explanation through many social and intercultural theories. They suggest tourist-host interaction and communication has been overrated, especially when tourists are travelling in a different culture. The level of contact and cultural understanding is relatively superficial, but more meaningful than mere commercial exchanges. The trend of globalization and cultural homogeneity was well recognized by both cultural groups. The acknowledgement of cultural difference and interaction between customers should be encouraged and facilitated in bars, in order to create an authentic bar experience and nurture effective intercultural communication.