Cops and Robber Game with a Fast Robber 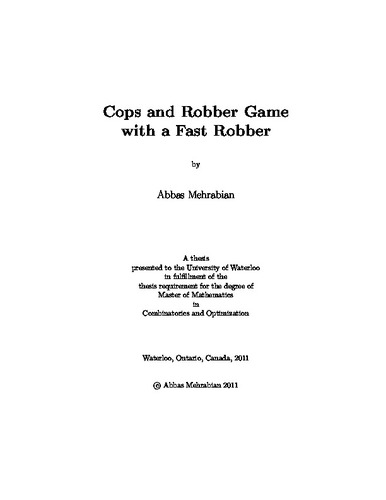 Graph searching problems are described as games played on graphs, between a set of searchers and a fugitive. Variants of the game restrict the abilities of the searchers and the fugitive and the corresponding search number (the least number of searchers that have a winning strategy) is related to several well-known parameters in graph theory. One popular variant is called the Cops and Robber game, where the searchers (cops) and the fugitive (robber) move in rounds, and in each round they move to an adjacent vertex. This game, defined in late 1970's, has been studied intensively. The most famous open problem is Meyniel's conjecture, which states that the cop number (the minimum number of cops that can always capture the robber) of a connected graph on n vertices is O(sqrt n). We consider a version of the Cops and Robber game, where the robber is faster than the cops, but is not allowed to jump over the cops. This version was first studied in 2008. We show that when the robber has speed s, the cop number of a connected n-vertex graph can be as large as Omega(n^(s/s+1)). This improves the Omega(n^(s-3/s-2)) lower bound of Frieze, Krivelevich, and Loh (Variations on Cops and Robbers, J. Graph Theory, to appear). We also conjecture a general upper bound O(n^(s/s+1)) for the cop number, generalizing Meyniel's conjecture. Then we focus on the version where the robber is infinitely fast, but is again not allowed to jump over the cops. We give a mathematical characterization for graphs with cop number one. For a graph with treewidth tw and maximum degree Delta, we prove the cop number is between (tw+1)/(Delta+1) and tw+1. Using this we show that the cop number of the m-dimensional hypercube is between c1 n / m sqrt(m) and c2 n / m for some constants c1 and c2. If G is a connected interval graph on n vertices, then we give a polynomial time 3-approximation algorithm for finding the cop number of G, and prove that the cop number is O(sqrt(n)). We prove that given n, there exists a connected chordal graph on n vertices with cop number Omega(n/log n). We show a lower bound for the cop numbers of expander graphs, and use this to prove that the random G(n,p) that is not very sparse, asymptotically almost surely has cop number between d1 / p and d2 log (np) / p for suitable constants d1 and d2. Moreover, we prove that a fixed-degree regular random graph with n vertices asymptotically almost surely has cop number Theta(n).