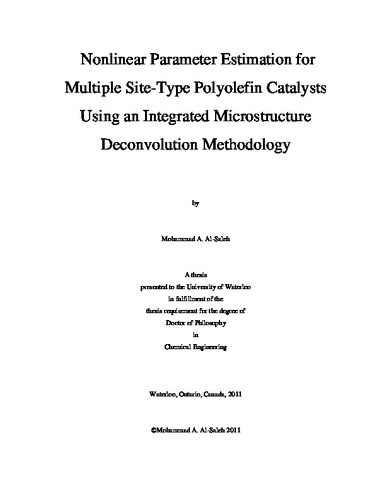 The microstructure of polyolefins determines their macroscopic properties. Consequently, it is essential to predict how polymerization conditions will affect polyolefin microstructure. The most important microstructural distributions of ethylene/alfa-olefin copolymers made with coordination catalysts are their molecular weight (MWD), chemical composition (CCD), and comonomer sequence length (CSLD). Several mathematical models have been developed to predict these microstructural distributions; reliable techniques to estimate parameters for these models, however, are still poorly developed, especially for catalysts that have multiple site types, such as heterogeneous Ziegler-Natta complexes. Most commercial polyolefins are made with heterogeneous Ziegler-Natta catalysts, which make polyolefins with broad MWD, CCD, and CSLD. This behavior is attributed to the presence of several active site types, leading to a final product that can be seen as a blend of polymers made on the different catalyst site types. The main objective of this project is to develop a methodology to estimate the most important parameters needed to describe the microstructure of ethylene/alfa-olefin copolymers made with these multiple site-type catalysts. To accomplish this objective, we developed the Integrated Deconvolution Estimation Model (IDEM). IDEM estimates ethylene/alf-olefin reactivity ratios for each site type in two-steps. In the first step, the copolymer MWD, measured by high-temperature gel permeation chromatography, is deconvoluted into several Flory’s most probable distributions to determine the number of site types and the weight fractions of copolymer made on each of them. In the second estimation step, the model uses the MWD deconvolution information to fit the copolymer triad distributions measured by 13C NMR and estimate the reactivity ratios per site type. This is the first time that MWD and triad distribution information is integrated to estimate the reactivity ratio per site type of multiple site-type catalysts used to make ethylene/alfa-olefin copolymers. IDEM was applied to two sets of ethylene-co-1-butene copolymers made with a commercial Ziegler-Natta catalyst, covering a wide range of 1-butene fractions. In the first set of samples (EBH), hydrogen was used as a chain transfer agent, whereas it was absent in the second set (EB). Comparison of the reactivity ratio estimates for the sets of samples permitted the quantification of the hydrogen effect on the reactivity ratios of the different site types present in the Ziegler-Natta catalyst used in this thesis. Since 13C NMR it is an essential analytical step in IDEM, triad distributions for the EB and EBH copolymers were measured in two different laboratories (Department of Chemistry at the University of Waterloo, and Dow Chemical Research Center at Freeport, Texas). IDEM was applied to both set of triad measurements to find out the effect of interlaboratory 13C NMR analysis on reactivity ratio estimation.