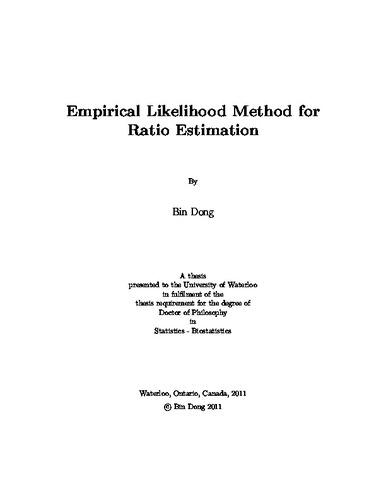 Empirical likelihood, which was pioneered by Thomas and Grunkemeier (1975) and Owen (1988), is a powerful nonparametric method of statistical inference that has been widely used in the statistical literature. In this thesis, we investigate the merits of empirical likelihood for various problems arising in ratio estimation. First, motivated by the smooth empirical likelihood (SEL) approach proposed by Zhou & Jing (2003), we develop empirical likelihood estimators for diagnostic test likelihood ratios (DLRs), and derive the asymptotic distributions for suitable likelihood ratio statistics under certain regularity conditions. To skirt the bandwidth selection problem that arises in smooth estimation, we propose an empirical likelihood estimator for the same DLRs that is based on non-smooth estimating equations (NEL). Via simulation studies, we compare the statistical properties of these empirical likelihood estimators (SEL, NEL) to certain natural competitors, and identify situations in which SEL and NEL provide superior estimation capabilities. Next, we focus on deriving an empirical likelihood estimator of a baseline cumulative hazard ratio with respect to covariate adjustments under two nonproportional hazard model assumptions. Under typical regularity conditions, we show that suitable empirical likelihood ratio statistics each converge in distribution to a 2 random variable. Through simulation studies, we investigate the advantages of this empirical likelihood approach compared to use of the usual normal approximation. Two examples from previously published clinical studies illustrate the use of the empirical likelihood methods we have described. Empirical likelihood has obvious appeal in deriving point and interval estimators for time-to-event data. However, when we use this method and its asymptotic critical value to construct simultaneous confidence bands for survival or cumulative hazard functions, it typically necessitates very large sample sizes to achieve reliable coverage accuracy. We propose using a bootstrap method to recalibrate the critical value of the sampling distribution of the sample log-likelihood ratios. Via simulation studies, we compare our EL-based bootstrap estimator for the survival function with EL-HW and EL-EP bands proposed by Hollander et al. (1997) and apply this method to obtain a simultaneous confidence band for the cumulative hazard ratios in the two clinical studies that we mentioned above. While copulas have been a popular statistical tool for modeling dependent data in recent years, selecting a parametric copula is a nontrivial task that may lead to model misspecification because different copula families involve different correlation structures. This observation motivates us to use empirical likelihood to estimate a copula nonparametrically. With this EL-based estimator of a copula, we derive a goodness-of-fit test for assessing a specific parametric copula model. By means of simulations, we demonstrate the merits of our EL-based testing procedure. We demonstrate this method using the data from Wieand et al. (1989). In the final chapter of the thesis, we provide a brief introduction to several areas for future research involving the empirical likelihood approach.