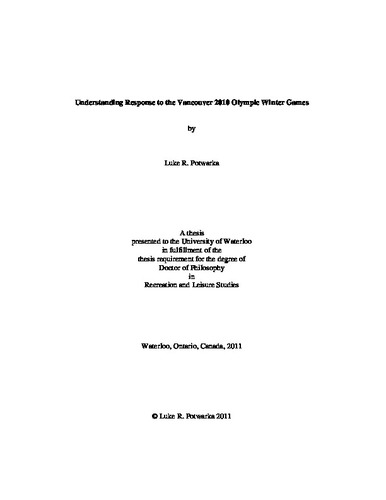 The present study employed Ajzen’s theory of planned behaviour (TPB) to understand the motivational factors associated with peoples’ intention to: (a) increase their physical activity levels in response to Vancouver 2010 Olympic Winter Games; (b) watch the event on television; and (c) purchase products or services from companies because they were sponsors of the event. According to the theory, behavioural intentions are determined by individuals’ attitude toward performing the behaviour (i.e., their overall evaluation of the behaviour); the subjective norms they associate with the behaviour (i.e., their beliefs about whether most people approve or disapprove of the behaviour); and perceived behavioural control (i.e., the perceived ease or difficulty of performing the behavior). As well, this investigation hypothesized that additional variables could predict intention. In particular, past behaviour and descriptive norms (i.e., people’s perceptions about the degree to which other people would perform the behavior) were examined in terms of their ability to explain significant proportions of variance in respondents’ intentions above and beyond TPB variables. Participants were enrolled in first and second year undergraduate classes at the University of Waterloo and the University of Victoria during the Fall 2009 and Winter 2010 term (n = 405). The questionnaire assessed each TPB construct (excluding actual behaviour) using standardized Likert-type scaling procedures suggested by Ajzen (2006). Additionally, the questionnaire assessed gender, geographic proximity to the event (i.e., whether students were enrolled at the University of Waterloo or the University of Victoria), past behaviour, and descriptive norms. Results from the regression analyses revealed that the TPB-based models accounted for 50.7%, 61.5% and 66.6% of the variance in respondents’ intentions to become more active in response to the event, watch the event on television, and purchase products or services from event sponsors respectively. Attitude toward the behaviour was the only TPB construct to play a prominent role in the prediction of all three responses of interest in the present investigation. The importance of the attitude construct in predicting such a diverse set of intentions suggests that sport consumer behaviour might be best understood in terms of expectancy-value cognitive theories such as the TPB. These theories suggest that people will be motivated to perform a particular behaviour (e.g., watching a sport event on television) when they expect to attain a valued outcome as a result of performing the behaviour (e.g., feelings of national pride). Descriptive norms and past behaviour explained an additional 29%, 9.3%, and 21% of the variance in respondents’ intention to become more active in response to the event, watch the event on television, and patronize event sponsors respectively. Among this sample of undergraduate students, responses to the event appeared to be strongly associated with beliefs about whether or not referent others would perform each behaviour. Additionally, much of what motivates sport consumer behaviour within this segment of the population may be related to notions of tradition and nostalgia. Implications for future research and the design of behaviour change interventions are discussed.