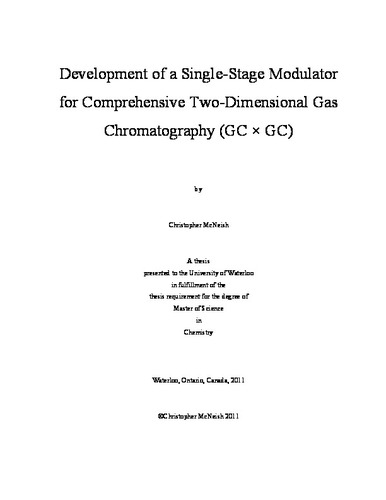 The ability to effectively analyze particulate matter (PM2.5) in air is becoming increasingly pertinent. Allen Goldstein of the University of California in Berkeley is studying the semi-volatile fraction of organic compounds in PM2.5 through the use of the thermal desorption aerosol gas chromatograph (TAG) system. However, as conventional GC does not provide adequate separation power, the development of comprehensive two-dimensional gas chromatography (GC × GC) was required. GC × GC works more effectively by utilizing a modulator that periodically traps and focuses analytes from a primary column onto a secondary column. This allows for the primary and secondary columns to separate the analytes based on two different properties. This report focuses on the continuing study and enhancement of a modulator designed by Ognjen Panić during his Masters project. Improving and testing the robustness of this dual stage modulator was originally the focus of this project. However, this study led to the development of a single stage modulator. In addition to that, the effect of modulator characteristics such as length of the restriction, total length of the modulator and wall thickness on the modulator performance were studied. A robustness test of the single stage modulator was also completed. Experiments conducted tested the characteristics of the new modulator to ensure it performed effectively and would satisfy the requirements of the TAG system. A study comparing the sensitivity of conventional gas chromatography and GC × GC was also preformed. The sensitivity of GC × GC was on average an order of magnitude better than that of 1D GC.