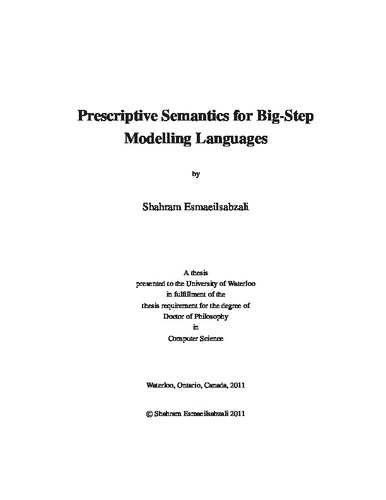 With the popularity of model-driven methodologies and the abundance of modelling languages, a major question for a modeller is: Which language is suitable for modelling a system under study? To answer this question, one not only needs to know the range of relevant languages for modelling the system under study, but also needs to be able to compare these languages. In this dissertation, I consider these challenges from a semantic point of view for a diverse range of behavioural modelling languages that I refer to as the family of Big-Step Modelling Languages (BSMLs). There is a plethora of BSMLs, including statecharts, its variants, SCR, un-clocked variants of synchronous languages (e.g., Esterel and Argos), and reactive modules. BSMLs are often used to model systems that continuously interact with their environments. In a BSML model, the reaction of the model to an environmental input is a big step, which consists of a sequence of small steps, each of which can be the concurrent execution of a set of transitions. To provide a systematic method to understand and compare the semantics of BSMLs, this dissertation introduces the big-step semantic deconstruction framework that deconstructs the semantic design space of BSMLs into eight high-level, independent semantic aspects together with the enumeration of the common semantic options of each semantic aspect. The dissertation also presents a comparative analysis of the semantic options of each semantic aspect to assist one to choose one semantic option over another. A key idea in the big-step semantic deconstruction is that the high-level semantic aspects in the deconstruction recognize a big step as a whole, rather than only considering its constituent transitions operationally. A novelty of the big-step semantic deconstruction is that it lends itself to a systematic semantic formalization of most of the languages in the deconstruction. The dissertation presents a parametric, formal semantic definition method whose parameters correspond to the semantic aspects of the deconstruction, and thus it produces prescriptive semantics: The manifestation of a semantic option in the semantics of a BSML can be clearly identified. The way transitions are ordered to form a big step in a BSML is a source of semantic complexity: A modeller needs to be aware of the possible orders of the execution of transitions when constructing and analyzing a model. The dissertation introduces three semantic quality attributes that each exempts a modeller from considering an aspect of ordering in big steps. The ranges of BSMLs that support each of these semantic quality attributes are formally specified. These specifications indicate that achieving a semantic quality attribute in a BSML is a cross-cutting concern over the choices of its different semantic options. The semantic quality attributes together with the semantic analysis of individual semantic options can be used in tandem to assist a modeller or a semanticist to compare two BSMLs or to create a new, desired BSML from scratch. Through the big-step semantic deconstruction, I have discovered that some of the semantic aspects of BSMLs can be uniformly described as forms of synchronization. The dissertation presents a general synchronization framework for behavioural modelling languages. This framework is based on a notion of synchronization between transitions of complementary roles. It is parameterized by the number of interactions a transition can take part in, i.e., one vs. many, and the arity of the interaction mechanisms, i.e., exclusive vs. shared, which are considered for the complementary roles to result in 16 synchronization types. To enhance BSMLs with the capability to use the synchronization types, a synchronizer syntax is introduced for BSMLs, resulting in the family of Synchronizing Big-Step Modelling Languages (SBSMLs). Using the expressiveness of SBSMLs, the dissertation describes how underlying the semantics of many modelling constructs, such as multi-source, multi-destination transitions, various composition operators, and workflow patterns, there is a notion of synchronization that can be systematically modelled in SBSMLs.