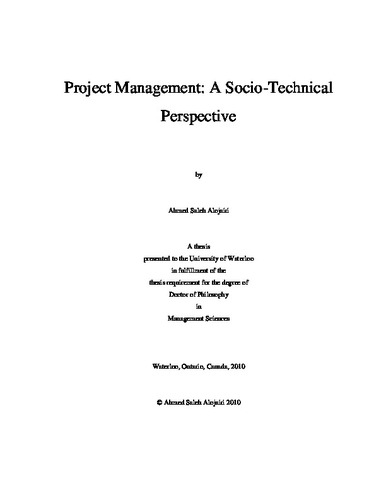 This dissertation presents a study on project management and its effectiveness in a multinational pharmaceutical company (MPC). A mixed qualitative-quantitative method consisting of a case study (33 managers) and a follow-up survey (122 employees) was conducted. The cybernetics theory and its related concepts were used to formulate the social and technical components of projects as a network of task-related social interactions within an organizational context. Interaction was defined as the variety or possible states one node generates for another node, while degree of coordination was defined as the extent to which a recipient node can handle the variety of interrelated nodes. Interaction Effectiveness (IE) was calculated based on the ratio of “helpful” to “not so helpful” behaviors between interrelated nodes. MPC’s average organizational IE ratio of 1.03 was used as a baseline to determine the relative effectiveness of different interactions. The IE ratio also revealed two structural network properties. First, a departmental-level analysis indicated that most network relationships were asymmetrical (76.5%), reflecting a significant discrepancy in perceptions between interrelated nodes. Second, the variability of IE ratios (standard deviation) ranged from 0.10 to 1.28, reflecting the degree of consistency among the relationships of each single node and its interrelated nodes. The results of a multiple regression analysis indicated a significant relationship between the perceived ranking of a node’s performance and the node’s IE ratio. Multiple regression analysis also indicated a significant relationship between the perceived ranking of a node’s importance and the total of that node’s helpful and not so helpful comments. Finally, the results showed that the IE ratio was almost double for employees’ positive working relationship links compared to links with which they reported negative working relationships. The qualitative findings also provide significant evidence of the method’s sensitivity to capture project management’s most crucial element of “time.” Categorizing the impact of not so helpful comments corresponded mostly to “delays” (68.87%), whereas the impact of helpful comments corresponded mostly to “saving time” (68.14%). Furthermore, categorizing decisions to handle variety revealed the dominance of “adhocracy” mechanisms (62.18%) to handle input variety as opposed to “procedural” variety handling mechanisms (20.63%). Categorizing the comments related to the not so helpful category of “unreasonable expectations” indicated that 51.4% of all comments pertained to “role overload” followed by “role conflict” (36.5%), with only 12.1% of all comments corresponding to “role ambiguity.” The quantitative follow-up survey’s primary objective was to test the research hypotheses regarding the relationship between “variety”-related concepts and different degrees of project complexity (complex versus simple). The survey supported all hypotheses except Hypothesis 7 regarding project management software. Results, limitations, potential improvements to the current study, and future research directions are discussed.