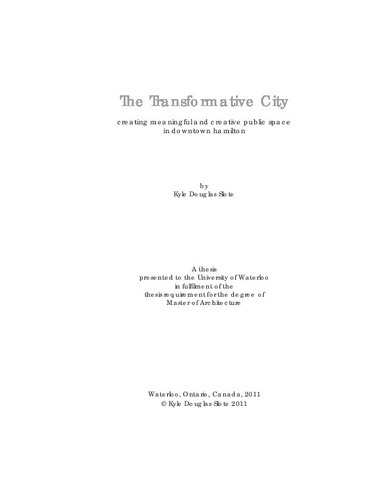 The issue of downtown revitalization has been much studied over the past several decades. However, much of the existing knowledge base pertains to our largest urban centres. This leaves a significant information gap with regards to mid-size cities. As a result, past renewal attempts in these cities have often been scaled down versions of what has worked in larger cities. In most cases, this has resulted in detrimental rather than reviving effects. The current trend in cities of all sizes is the implementation of Creative City Theory. This thesis seeks to study this trend and its specific relevance to the mid-size city. The scope of research will then build on the current theory by exploring the effects of well-designed public spaces and their ability to not only unleash the creative spirit but to revitalize the post-industrial mid-size city downtown. This information will then be applied to a design study for Hamilton, Ontario where failed renewal attempts have crippled the city’s downtown. The design will concentrate on Jackson Square (formerly known as Civic Square), a superblock within the very centre of downtown Hamilton. Through a redesign of Jackson Square, the thesis proposes to create a place that not only fosters creativity, but is once again meaningful and significant to Hamilton citizens. While the application of research to Hamilton is specific, the goal is to produce a body of work with principles that can be applied to any number of mid-size cities across the post-industrial world.