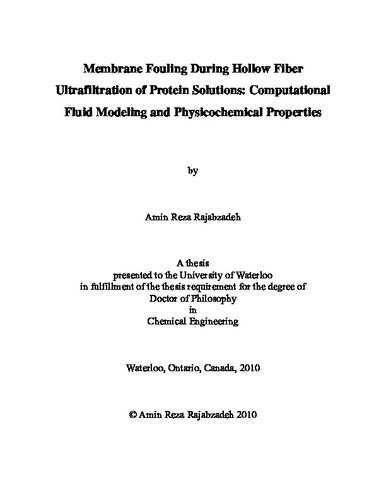 Hollow fiber ultrafiltration is a viable low cost alternative technology for the concentration or separation of protein solutions. However, membrane fouling and solute build up in the vicinity of the membrane surface decrease the performance of the process by lowering the permeate flux. Major efforts have been devoted to study membrane fouling and design more efficient ultrafiltration membrane systems. The complexity of membrane fouling, however, has limited the progress to better understand and predict the occurrence of fouling. This work was motivated by the desire to develop a microscopic Computational Fluid Dynamics (CFD) model to capture the complexity of the membrane fouling during hollow fiber ultrafiltration of protein solutions. A CFD model was developed to investigate the transient permeate flux and protein concentration and the spatial fouling behavior during the concentration of electroacidified (pH 6) and non- electroacidified (pH 9) soy protein extracts by membrane ultrafiltration. Electroacidification of the soy protein to pH 6 was found to decrease the permeate flux during UF which resulted in longer filtration time. Lower electrostatic repulsion forces between the proteins at pH 6 (near the protein isoelectric point) resulted in a tighter protein accumulation on the membrane surface suggested to be responsible for the lower permeate flux observed in the UF of the electroacidified soy protein extract. A new transient two-component fouling resistance model based on the local pressure difference, permeate velocity and protein concentration was implemented in the resistance-in-series flux model to describe the dynamics of the reversible and irreversible fouling during the filtration and the effect of pH on the membrane fouling. Good agreement between the experimental data and the model predictions was observed. Mathematical modeling was performed to estimate the osmotic pressure and diffusion coefficient of the proteins bovine serum albumin (BSA) and soy glycinin, one of the major storage proteins in soy, as a function of protein concentration, pH, and ionic strength. Osmotic pressure and diffusion coefficient of proteins play vital roles in membrane filtration processes because they control the distribution of particles in the vicinity of the membrane surface, often influencing the permeation rate. Therefore, understanding the behavior of these properties is of great importance in addressing questions about membrane fouling. An artificial neural network was developed to analyze the estimated data in order to find a simple relation for osmotic pressure as a function of protein concentration, pH, and ionic strength. For both proteins, the osmotic pressure increased as pH diverged from the protein isoelectric point. Increasing the ionic strength, however, reversed the effect by shielding charges and thereby decreasing the osmotic pressure. Osmotic pressure of glycinin was found lower than that of BSA. Depending on how much pH was far from the isoelectric point of the protein, osmotic pressure of BSA could be up to three times more than the glycinin’s. Two different trends for diffusion coefficient at specified pH and ionic strength were observed for both proteins; diffusion coefficient values that decreased with protein concentration and diffusion coefficient values that passed through a maximum. A rigorous CFD model based on a description of protein interactions was developed to predict membrane fouling during ultrafiltration of BSA. BSA UF was performed in a total recycle operation mode in order to maintain a constant feed concentration. To establish a more comprehensive model and thereby alleviate the shortcomings of previous filtration models in literature, this model considered three major phenomena causing the permeate flux decline during BSA ultrafiltration: osmotic pressure, concentration polarization, and protein adsorption on the membrane surface. A novel mathematical approach was introduced to predict the concentration polarization resistance on the membrane. The resistance was estimated based on the concentration and thickness profile of the polarization layer on the membrane obtained from the solution of the equation of motion and continuity equation at a previous time step. Permeate flux was updated at each time step according to the osmotic pressure, concentration polarization resistance, and protein adsorption resistance. This model had the ability to show how microscopic phenomena such as protein interactions can affect the macroscopic behaviors such as permeate flux and provided detailed information about the local characteristics on the membrane. The model estimation was finally validated against experimental permeate flux data and good agreement was observed.