Empirical and Kinetic Models for the Determination of Pharmaceutical Product Stability 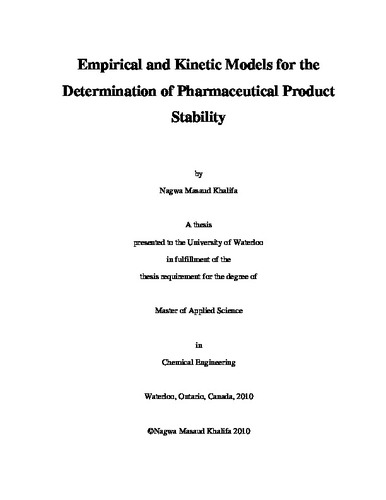 Drug stability is one of the vital subjects in the pharmaceutical industry. All drug products should be kept stable and protected against any chemical, physical, and microbiological degradation to ensure their efficacy and safety until released for public use. Hence, stability is very important to be estimated or predicted. This work involved studying the stability of three different drug agents using three different mathematical models. These models included both empirical models (linear regression and artificial neural network), and mechanistic (kinetic) models. The stability of each drug in the three cases studied was expressed in terms of concentration, hardness, temperature and humidity. The predicted values obtained from the models were compared to the observed values of drug concentrations obtained experimentally and then evaluated by calculating the mean of squared. Among the models used in this work, the mechanistic model was found to be the most accurate and reliable method of stability testing given the fact that it had the smallest calculated errors. Overall, the accuracy of these mathematical models as indicated by the proximity of their stability measurements to the observed values, led to the assumption that such models can be reliable and time-saving alternatives to the analytical techniques used in practice.