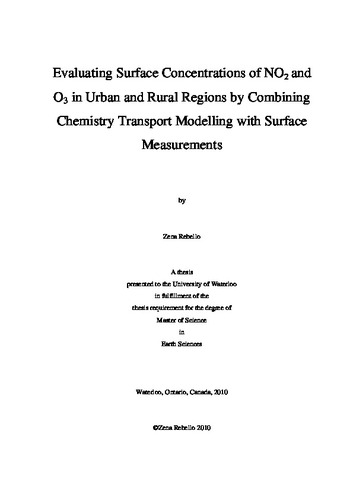 A base case modelling investigation was conducted to explore the chemical and physical behaviour of ground-level ozone (O3) and its precursor nitrogen dioxide (NO2) in Ontario using the U.S. Environmental Protection Agency (EPA) Community Multiscale Air Quality (CMAQ) model. Two related studies were completed to evaluate the performance of CMAQ in reproducing the behaviour of these species in both rural and urban environments by comparing to surface measurements collected by the Ontario Ministry of the Environment (MOE) network of air quality stations. The first study was a winter examination and the second study was conducted for a period during the summer of the same year. The municipality of North Bay was used to represent a rural setting given its smaller population relative to the city of Ottawa which was the base of the urban site. Statistical and graphical analyses were used to validate the model output. CMAQ was found to replicate the spatial variation of O3 and NO2 over the domain in both the winter and summer, but showed some difficulty in simulating the temporal allocation of the species. Validation statistics for North Bay and Ottawa showed overall O3 mean biases (MB) of 3.35 ppb and 2.25 ppb, respectively, and overall NO2 MB of -8.75 ppb and -4.37 ppb, respectively for the winter. Summer statistics generated O3 MB of 4.66 ppb (North Bay) and 10.05 ppb (Ottawa) while both MB for NO2 were between -2.20 ppb to -2.55 ppb. Graphical analysis showed that the model was not able to reproduce the lower levels of O3, especially at night, or the higher levels of NO2 during the day at the North Bay site for either season. This was expected since the comparisons were made between point measurements and 36 km grid-averaged model results. The presence of high amounts of NO2 emissions local to the monitoring sites compared to the levels represented in the emissions inventory may also be a contributing factor. The simulations for Ottawa demonstrated better agreement between model results and measurements as CMAQ provided a more accurate reproduction of both the higher and lower mixing ratios of O3 and NO2 during the winter and summer seasons. Results indicate that CMAQ is able to simulate urban environments better than rural ones.