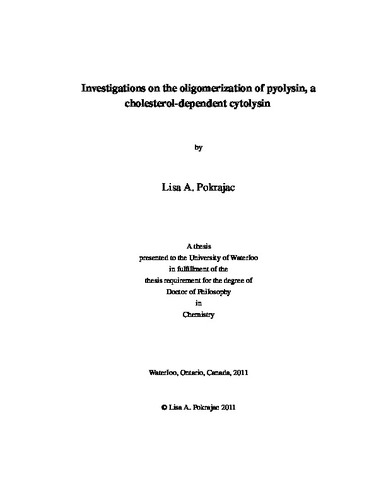 The bacterial toxin pyolysin (PLO) is a member of the family of Cholesterol-Dependent Cytolysins, which form large, oligomeric pores in cholesterol-containing membranes. The general CDC structure has an elongated shape and consists of four domains rich in β-sheet structure. Upon binding to a membrane, molecules diffuse laterally on the surface and oligomerize to form a pre-pore complex, then insert into the membrane yielding pores of unusually large size, approximately 30 nm in diameter. In this work, the oligomerization properties of PLO were investigated. In particular, the role of the C-terminal domain in the oligomerization process, the effects of a disulphide-tethered mutant on the activity of the wild type toxin, and the pore-forming ability of oligomers pre-formed in solution were characterized. Chapter 2 characterizes the functional properties of a recombinant fragment that corresponds to the C-terminal domain 4 of PLO. It is shown that this fragment can form hybrid oligomers with intact PLO toxin molecules, and is also capable of self-oligomerization. The fragment has no haemolytic activity of its own; nevertheless, it can to some degree increase the haemolytic activity of the wild type toxin. In addition, in a mixture domain 4 and wild type interact in such a way as to form unusual shapes on cholesterol crystals that have not been previously observed. Chapter 3 describes the effects of a disulphide bond linking domain 2 to a membrane-inserting region of domain 3 on the oligomerization process. The disulphide mutant was not able to oligomerize on its own, and when combined with active PLO toxin, the haemolytic activity of wild type was significantly inhibited. Also, the combination of the disulphide-tethered mutant with intact toxin resulted in the formation of hybrid oligomers. This, in turn, caused an increase in incomplete ring formations on cholesterol surfaces which correlate to a reduction in functional pore size, suggesting that insertion of subunits is partially cooperative. The results of the investigation of the pore-forming ability of solution-derived oligomers (SDO) are described in Chapter 4. Here, the fluorescence emission of an environmentally-sensitive probe on the SDO after membrane insertion was a fraction of that observed with the monomeric control, which was supported by hydrophobic quenching analyses. This suggests that the formation of SDO may block necessary conformational changes in the intact toxin to allow membrane insertion.