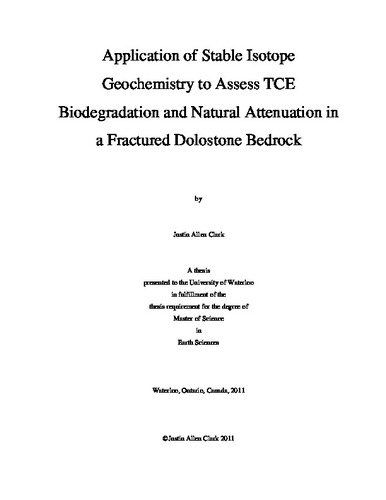 Isotopic methods have been developed over the last 10 years as a method for determining chemical interactions of chlorinated solvents. These methods are especially promising for. This study attempts to employ and develop compound specific isotopic analyses of TCE and cDCE, along with chemical data, to characterize the degradation of TCE in a fractured bedrock aquifers. The Smithville site is a contaminated field site with extremely high levels of TCE contamination that is currently undergoing monitored remediation. From December 2008 until April 2010 extended samples were collected from the site to provide additional data analyses including isotopic data. The redox conditions at the site are anoxic to reducing, with sulfate reduction and methanogenesis as dominant terminal electron accepting processes. Redox data indicates that well electrochemical conditions are highly variable within the site, including areas near the source zone that not very reducing. Documented changes in groundwater conditions to much more reducing environments indicate that oxidation of organic matter is occurring at the Smithville site in select wells. Chemical analyses of TCE, DCE, VC, ethene and ethane are employed determine whether reductive dechlorination was occurring at the site. Results of field testing indicate that many wells on site, especially in the proximity of the source zone, dechlorination products were found. The isotopic data had a high range in both carbon and chlorine isotopes. Chlorine isotopic data ranges from a δ37Cl(TCE) of 1.39 to 4.69, a δ37Cl(cDCE) of 3.57 to 13.86, a δ13C(TCE) of -28.9 to -20.7, and a δ13C(cDCE) of -26.5 to -11.82. The range in values indicate varying degrees of degradation throughout the site, with the same wells grouping together. Combined chemical, redox and isotopic data shows that degradation seems to be a removal process for TCE at the Smithville site. Concentrations of chemicals created as a result of TCE degradation verify degradation, especially in wells 15S9, R7 and 17S9. Historically production of DCE in significant amounts, above 1.0 ppb, was observed to only occur after 2003. In addition to this, DCE data shows that the percentage of DCE made up of cDCE is above 96%. This indicates that microbes most likely mediate the processes that formed DCE from TCE. The linear regression of the delta-delta plot for isotopic TCE data shows line that is likely a direct function of the carbon and chlorine isotopic fractionation imparted upon the original TCE released. The slope found is consistent with data collected from other studies though cannot be applied to determining the process directly given the range of variability in isotopic field data.