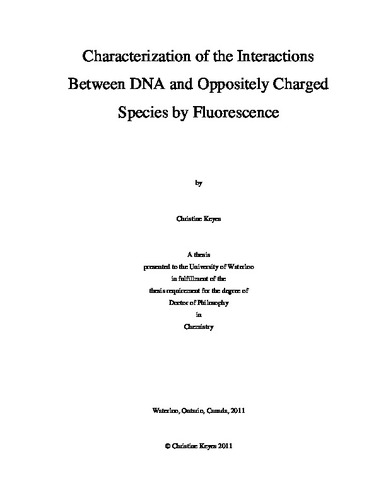 The characterization of the interactions between DNA and oppositely charged species were characterized by fluorescence. Quantitative and insightful information on the distribution of positively charged species around the DNA helix was obtained by analyzing the fluorescence decays with an appropriate protocol. First, the interactions between DNA and divalent metal cations were studied by fluorescence using DNA – intercalated ethidium bromide (DNA-EB) as a probe. Second, the interactions between DNA and more structurally complex cations, namely positively charged gemini surfactants were studied by fluorescence. In this case, one of the two alkyl tails of the gemini surfactant was substituted with the chromophore pyrene to yield an asymmetrical gemini surfactant referred to as Py-3-12, so that the interactions between Py-3-12 and DNA could be followed by fluorescence. The interactions between DNA-EB and metal cations in solution were studied by following the fluorescence quenching of DNA-EB by divalent metal cations randomly distributed around the DNA helix, a process which occurs via electron transfer (ET). The random distribution of divalent metal cations around the DNA helix led to a distribution of quenching rate constants that complicated the analysis of the fluorescence data. However, the Fluorescence Blob Model (FBM) was applied to analyze the fluorescence data and this analysis yielded quantitative information about the rate of ET and the distance over which ET took place from an excited DNA-EB to Cu²⁺ cations. For a salt concentration of 5×10⁻3 M, the size of a blob, equivalent to the average distance over which ET takes place, was determined to be 10 bp with a quenching rate constant of 4×107 s⁻¹ between an excited DNA-EB to Cu²⁺ cations. The effect of ionic strength on the distance over which ET occurred (dblob) between an excited DNA-EB and Cu²⁺ was studied. The parameter dblob was compared to the Debye screening length, ϰ⁻¹, and dblob was found to follow ϰ⁻¹ when the salt was present in excess over the DNA phosphates and this result suggested that ϰ⁻¹= dblob represents a distance of minimal approach between divalent metal cations bound along the DNA helix. The complexes formed between DNA and Py-3-12 were studied by fluorescence for the future purpose of relating structure with transfection efficiency. The Model Free (MF) analysis of the pyrene monomer and excimer fluorescence decays yielded quantitative information about the internal dynamics of the Py-3-12 surfactant micelles in water and bound to the DNA helix. The formation of Py-3-12 micelles in water was first characterized by fluorescence using the MF procedure. The robustness of the MF procedure was validated by determining the concentration of surfactant free in solution, [Py-3-12]free, as a function of the overall surfactant concentration, [Py-3-12]. It was found that [Py-3-12]free increased linearly with increasing [Py-3-12] up to 0.22 mM, which is the CMC of the surfactant obtained by surface tension. Above this concentration, [Py-3-12]free remained constant and equal to 0.22 (±0.06) mM. When studying the interactions between Py-3-12 and DNA, the total concentration of Py-3-12 was held constant at a value lower than the CMC to ensure that any excimer formed was due to the binding of Py-3-12 to DNA. Near a (-/+) ratio of 1.0, all surfactants were bound to DNA and above this (-/+) ratio, the molar fractions of the pyrene species in solution remained unchanged with increasing DNA concentration. The parameter <k> for Py-3-12 bound to DNA was found to equal 50 ± 3 × 10⁷ s⁻¹ which is smaller than <k> for Py-3-12 micelles equal to 79 ± 2 × 10⁷ s⁻¹. This suggests that the binding of Py-3-12 to the phosphates along the DNA backbone results in micelles that are more hindered than when no DNA is present in solution. The lifetime of the pyrene excimer of ~30 ns and 55 ns, for the poorly and properly stacked pyrene dimers, respectively, was the same as those found for the Py-3-12 micelles in water, which suggests that Py-3-12 clusters in a micellar form near the DNA helix and possibly adopts a “beads on a string” structure.

Christine Keyes (2011). Characterization of the Interactions Between DNA and Oppositely Charged Species by Fluorescence. UWSpace. http://hdl.handle.net/10012/5770